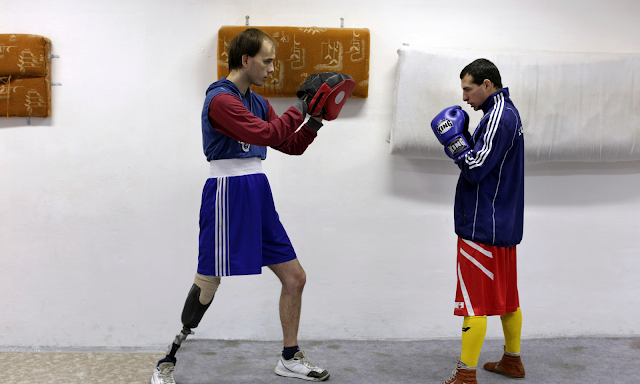 Slovakia’s Oscar submission Koza is not a contender. The Slovaks admirably put up their dukes with an unconventional candidate for the Best Foreign Language Film race, but Koza, even at an anemic seventy-five minutes, is a tiresome slog. The film follows a down-and-out boxer named Koza (Slovak for “goat”), played by Peter Balaz, as he goes back into the ring to earn enough money to pay for his girlfriend’s abortion (why not double team with Lily Tomlin?) and this story of a well-intentioned loser is no knock-out punch. It’s a harmless welterweight.


Director Ivan Ostrochovsky doesn’t bring much punch from the corner of the ring as Koza mostly plays out in drab interiors that are awkwardly staged and placidly shot. Koza marks the filmmaker’s first attempt at narrative filmmaking following a few documentaries, and the observational style eschews non-fiction aesthetic, but the dramatic energy of the film is a vacuum of dead air. Little happens and Koza is frankly boring as Koza broods and trains. Some black humour with a hack trainer/chicken farmer add minimal laughs that still struggle to raise the film a weight class.

If Koza lacks the dramatic punch to satisfy even a fan of esoteric world cinema, it nevertheless has a hook that makes it a publicist’s dream film. This year’s Toronto International Film Festival, where Koza had its North American Premiere, featured publicists aggressively, if not assaultively, hounding critics and journalists with “stories” that would inspire them, rather than films that would move them. (It’s worth noting that the barrage of publicists punching writers in the face isn’t necessarily the Festival’s o, for that matter, Koza’s fault.) Koza perfectly captures the fallacy of this angle: if the film doesn’t work, then the story is pitiless and the film falls doubly short since it sends a pitch that swings with a miss. The film comes first. Everything else is noise.

The “story” behind Koza is that the film essentially stars Balaz as a variation of himself, and some grainy TV footage of a boxing match adds some context, but it could just as easily be fiction as viewers have seen dramatic films replicate odd film stocks and grainy images to add a sense of authenticity. The film, one could say, “docudramatizes” Balaz’s life as Ostrochovsky fights with fading glory amidst a backdrop of barren poverty. Balaz might be authentic fit for the role, but he's not a strong actor. Even playing himself, his blank stare isn't compelling, and many of the non-actors who fill the film are equally subdued. Koza needs the press notes to leave an impact, though. Without them, one is lost and unmoved. A film needs to hit on some level—intellectually, emotionally, spiritually, or physically—to connect and land a blow. What's a story worth if one doesn't care about the film?

Koza had its North American Premiere at the 2015 Toronto International Film Festival.