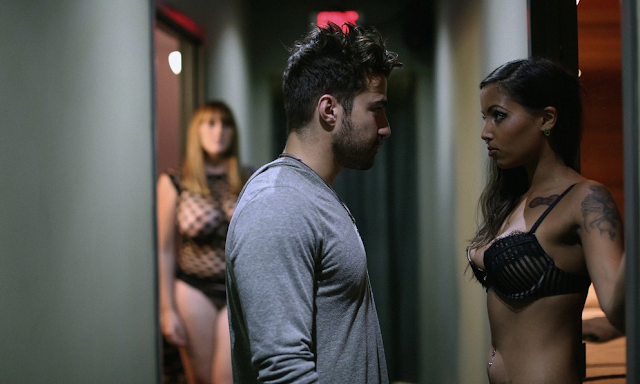 It takes seven minutes for Jackie Boy to arrive at an exchange of dialogue, and some viewers might wish that Jackie Boy (the second speaker) and his band of merry men had kept their foul mouths shut. There’s nothing wrong with Ottawa filmmaker Cody Campanale’s script, mind you, it’s just that Jackie Boy is bound to make audiences feel damned uncomfortable with its unflinching portrait of a generation of self-infatuated young adults that doesn’t weigh actions with consequences. Jackie Boy is bound to polarize audiences, but this dark, sexy, and edgy character study will shake anyone who survives it.

The aforementioned silence that ensues before the exchange between Jackie (Alino Giraldi, who appeared in last year’s OIFF film My Father and the Man in Black) and his boys Kal (Edward Charette) and Tony (Andrew Di Rosa), sets up a world of alarming hedonism. These guys feel entitled to do what and whomever they want when they want, and the sad part is that little stops them in this rape culture cautionary tale. As Jack, a grade-A predator, finds himself on the prowl at a nightclub the night before, his smoldering stare catches some sex eyes with a hottie (Chloe Van Landschoot) across the bar. They flirt, they drink, he snorts some coke off her boobs, and they share a pill, using a little tongue action to make it go down more sweetly.

Jackie and his hook-up say nothing to each other aside from come-hither looks and ambiguous nods of consent. Forget intimacy, these two are in it for the thrill. Take the moment when they finally go home to fuck and Jack whips out not his dick but an iPhone (ok, he whips the other one out, too, but after) and starts snapping sexy photos of the girl. She’s stripped, spread, and utterly degraded with her panties in her mouth.

Cut to the morning after when Jack does the real damage. He browses through a phone and marvels at the crisp, clear pictures of this young woman’s vagina. Then, without any hint of guilt or shame, he posts them from her Twitter account. #Meow

It’s worth noting the opening sequence in detail because this nasty stuff feels alarmingly real. Everyone’s heard stories of one-night stands gone badly, and of sexting gone awry, and Jackie Boy has both thumbs on the dark side of hookup culture. (Although Kal’s constant recording of Jack’s escapades can be a bit heavy.) This film’s very much a product of the digital age as anonymity gives perverts and the entitled alike a sense that they can exploit the other half of their encounters, since relationships are now just ephemeral things, like a high or a buzz, which one can swipe on or swipe off at will. Campanale creates Jack’s life as a cycle of sex, drugs, and power-tripping as he goes through women like an alcoholic guzzles 26ers. Jackie Boy has overtones of Shame and echoes of Taxi Driver, especially in its brutally violent finale, as the film cycles through nights of insomniac excess. This film dares the audience to despise everything about it, but the explicitness, the sordidness, and the unseemliness are exactly the point.

Jack isn’t all bad, though, as Giraldi’s compelling performance creates a portrait of a lost boy underneath Jack’s brooding stare and sexuality. He's not a bad person at heart, just look at how he relates to his father and his cat; he just has no idea how to channel his energy and passion. Things break for Jack when he meets Jasmine (a very engaging Shannon Coulter), who doesn’t buy into his act and aggressive come ons—for a while. Playing the game of hard to get, Jasmine teaches Jack that person-to-person connection isn’t a lost cause. Call it a Beauty and the Beast scenario or an act of lion taming, but Jackie Boy finds a moral centre within its gritty mix of sex and violence. Just when Jack finds his balance, though, and Jasmine puts him on the mend, Campanale lets blind masculine rage change the course of the anti-hero’s fate and steer him towards tragedy.

Tragedy is expected since the film adapts Campanale’s stage play Fragile Minds, yet Jackie Boy barely shows any sign of its stage roots. The film features a few intense interchanges between characters—gruff, coarse dialogue with more F-bombs than The Wire—but it has far more silence. Jackie Boy has surprisingly little dialogue, and the absence of the narrative drive that goes along with dialogue makes the film slowly expository and it sometimes puts the film in a repetitive cycle with Jack’s montage-heavy excess. (Although the grind serves a purpose.)

The film holds nothing back in sex or violence. The explicit nature of the film is emotionally and mentally exhausting as girls are stripped and used as Jack finds release wherever he can, from bars to kitchen parties, and massage parlours. The aggression is more visceral with the climax of the film exploding in a challenging pretzel of sexual violence that leaves no easy answers.

Jackie Boy, which was shot in the Hamilton and Toronto areas, is far more provocative and risqué than most films one sees in the Ottawa film scene or at the Ottawa International Film Festival, and it’s one of the more promising local works to debut at the festival. Campanale, who won the first Ottawa Independent Video Award for Narrative film for Jackie Boy earlier this year, displays a strong hand for tone and character as Jack thrusts the audience into a dark world that could easily leave viewers feeling soiled, but instead leaves one stunned and speechless. The film challenges the audience by leaving them with more questions than answers, and the challenging and unsettling ending invites an urgent debate on the future of Jack’s generation. Jackie Boy is a difficult film, but admirably so.

Jackie Boy has its Canadian Premiere at the Ottawa International Film Festival on Sunday, Oct. 18 at Cineplex Lansdowne at 4:00 pm.

Please visit www.oiff.ca for more information on this year’s festival.