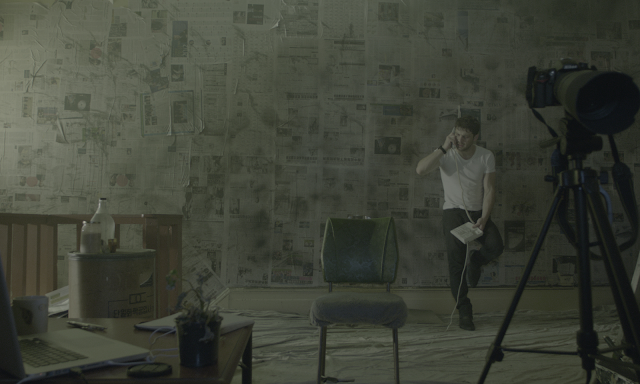 Rear Window goes down under in the incoherent Aussie psychological drama Observance. Parker (Lindsay Farris) takes a gig creeping on a blond woman through the back peephole of a vacant apartment, but instead of seeing a murder, he witnesses one through the fleeting fever dream of his mind. There's a bug in the air at this little Aussie complex, yet its source, antidote, and purpose are never clear. Observance is an admirable attempt at lo-fi horror that disappoints by never asserting itself.

Maybe Parker is the carrier or maybe he's the disease itself, or maybe it's all a metaphor for his grief, but Observance doesn't give the audience any much substance with which they may suss out the mystery. Not, for that matter, does it give them any reason to care. Montage-y freak-outs become tiresome.

Choppy bits of a dead girl and some creepy kid infect Parker’s mind in rapid-fire edits à la Requiem for a Dream. A few days of being holed up and playing the creeper sicken him with a deadly virus à la Dys-. He goes a little nuts à la Black Swan. The apartment becomes a living nightmare à la Repulsion.

Observance draws on many influences as it creates a feverish world of psychological horror, but it feels wholly derivative as it borrows elements from better films without offering anything new. Chills are few and far between, and thrills are even fewer, and lead actor Lindsay Farris is certainly no Natalie Portman. Limitations on budget also make the single-setting drama a bit protracted as it draws as much as it can from so little. This element proves the most tedious as Observance comes in a long line of recent genre films (some of which haven’t necessarily hit the festival circuit for good reasons) that creates a horror film premises on one person trapped in a room. The premise more or less results in the same film across the field. (I.e. a tired gimmick.) The film opens up a little with attractive, if empty, landscape shots. Claustrophobia only holds for so long before the walls of the screening room start closing in.

The sound design, on the other hand, is phenomenal and original work. Observance really creates some psychological hell in its audio tracks.  Shut your eyes and prepare for terror.

Observance screened in Ottawa at the Ottawa International Film Festival.