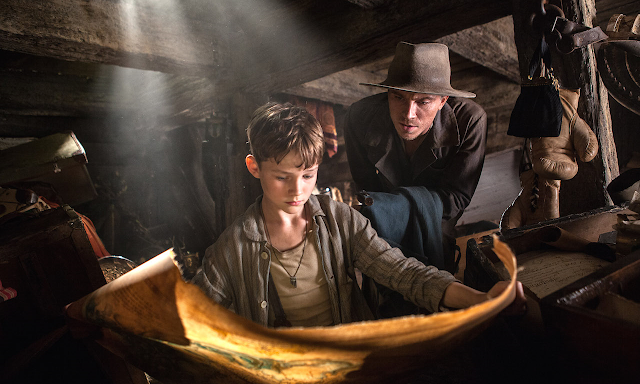 
There’s no signature Joe Wright long take in Pan, no “Dunkirk shot” that makes one swoon in Atonement and no dazzling dance number like the theatrical centrepiece in Anna Karenina. If there is, its effect is wholly lost and wasted amidst the gratuitous 3D. (This review considers the 3D presentation.) Even a die-hard Joe Wright fanboy, like one who thinks Anna Karenina is the best thing ever made since “Venti Starbucks,” can’t help but pout over Pan. This latest film from the great director of Anna Karenina, Hanna, and Atonement just doesn’t feel like a “Joe Wright film.” Even The Soloist has spark.

This utterly unnecessary origin story on Peter Pan carries some of the ornate style, scope, and artistic vision of a Wright film, but everything in Pan seems at odds with itself. It’s a technical marvel and it looks spectacular from a perspective of production design and costume design (hat tip to Jacqueline Durran once again), yet the whole thing flies on dead air. Pan’s problem is that it’s just a terrible concept. It doesn’t really matter how Peter Pan got to Neverland, since the magic of the story lives in the mystery and unknown possibilities. Explaining the story simply ruins the magic.

Pan’s other problem, and this one is a biggie, is that the producers, director, and distributor clearly have no idea who their target audience is and they have wildly different ideas about what kind of film Pan is. Pan, on one level, is a kids movie: playful stuff, silly asides, and lots of action. On another level, Pan is an artistically ambitious film that stretches visual parallels with flights of the imagination and a childlike wonder for escapism. That thread, though, is fleeting. The overriding energy and probably the one from the bigwigs, is that Pan serves as a spectacular opportunity for parents to bring their kids to share a childhood favourite and experience it anew. I.e.: it’s a VFX cash grab, and one that Warner Bros. needs both parent and child to fork over three extra bucks for 3D.

The crappy 3D adds little novelty as Peter (Levi Miller) learns to fly and sails to Neverland on a flying pirate ship that resembles a Zeppelin or Nazi spy plane. The visuals overwhelm the film, especially in its latter act that plays like a reject reel of CGI space junk from Jupiter Ascending. The grand finale sees Peter, Hook (Garrett Hedlund), and Tiger Lily (Rooney Mara) battle Blackbeard (Hugh Jackman) for the secret treasure trove of magic pixie dust (or something like that) in a world of shiny fake things.

Young kids might like the nonsensical plot since it moves very quickly and provides lots of rousing action in elaborate set pieces. Mature audiences, however, are less likely to be patient with the sheer randomness of the film—it’s too much like Peter Pan meets Oliver Twist meets Jurassic World meets Jupiter Ascending—and are more likely to groan at the on-the-nose references to the original JM Barrie tale than admire them. Pan, for example, introduces the Lost Boys with a half-assed exchange between Blackbeard and his underling that offers a lame name drop, “Is the boy lost?” / “He’s a lost boy.” Peter’s a lost cause, more likely.

Pan actually proves annoying whenever it connects the story to the Peter Pan audiences know well. For example, the film introduces Hook as the anonymous character played by Hedlund gives Peter some advice and sharpens his pickaxe with a hook. It’s a subtle enough move, until Pan gives the hook a lengthy close-up. (“Did you see it?” the camera asks, while nudging viewers in the ribs.) Then it gives another, and another before clunkily giving the line, “The name’s Hook!” an hour later for anyone who hasn’t already clued in. (He’s CAPTAIN HOOK, if you don’t get it.)

Pan makes even less sense when Peter first flies in to Neverland on the pirate ship and a chorus of children all break out into song and sing Nirvana’s “Smells Like Teen Spirit” with chants of “Hello, hello, hello” as Blackbeard enters the film. Maybe they’re channelling lost boys, but the song seems out of place in a film that otherwise caters to PG-13 crowd. Few parents probably want to go home and explain that the man behind that song shot himself in the head, and the song choice is an eerie and misguided hint that Pan harbors artistic aspirations that don’t come to fruition in its final cut.

The film feels especially awkward in the casting of Rooney Mara as Tiger Lily, whom even the Disney animated original gave a dash colour. Pan doesn’t explain why Tiger Lily is clearly British, and the film could have easily offered a token line, even the pithiest of excuses as she explains the story of Peter’s mother to the boy, to make Tiger Lily more PC. It wouldn’t be that farfetched to play some angle on theatricality or self-reflexivity given Wright’s previous work on Anna Karenina. There’s nothing bad with Mara’s performance, but the casting choice is the laziest mistake among many that diminishes the work as a whole. There’s a lot wrong with Pan and sadly little Wright.