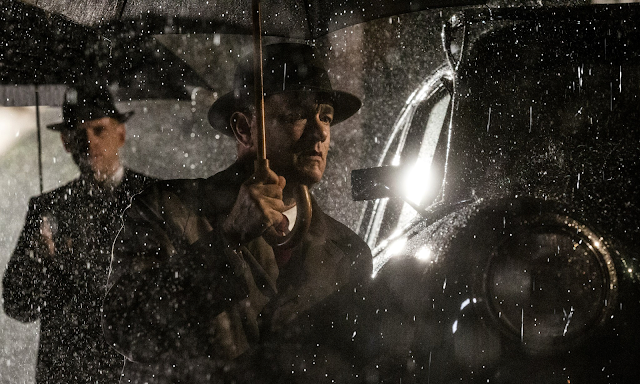 Spielberg is back! The master of escapism returns with the rousing and impeccably crafted Cold War drama Bridge of Spies. It might seem strange to say that Spielberg emerges from a slump even after his two previous films, Lincoln and War Horse, are both Best Picture Oscar nominees and Indiana Jones and the Kingdom of the Crystal Skull was a box office hit even if it stained a franchise, but Bridge of Spies sees Spielberg in his element. The film is grandly entertaining and polished with the signature Spielberg flare. It’s patriotically and wholesomely appealing, yet—and this aspect most crucially elevates the film above Spielberg’s most recent works—it doesn’t feel lame, trite, or cheesy. Bridge of Spies is instead dark and thoughtful on America’s place in the world and its position on foreign policy. In short, Bridge of Spies showcases of Spielberg’s skills as both an entertainer and an artist.


Ample credit for the wild success of Bridge of Spies belongs to Spielberg’s greatest collaborators, Tom Hanks, who gives one of his stronger performances as lawyer James B. Donovan, a kind and pragmatic man faced with the difficult task of defending accused Russian spy Rudolph Abel (Wolf Hall’s Mark Rylance). The case is simply a charade of American justice, yet Donovan’s empathy mixes with his shrewd legal mind as he fights for the rights and freedom of his client. It doesn’t matter if Abel did the crime or if didn’t: Donovan knows that this case is significant for Cold War era America.

His assessment proves to be true when young American CIA pilot Francis Gary Powers (Austin Stowell) finds himself shot down and in enemy hands whilst performing a covert aerial reconnaissance of Russian territory. The task falls on Donovan, having proved himself a smart legal mind and one for whom compassion towards Abel is unique in America, to act as the chief negotiator between American and the Russians to get their man back in exchange for the Russian spy. The crux of the matter, though, is that an innocent American student, Frederic Pryor (Will Rogers), was arrested in Berlin, where negotiations are happening on both sides of the rising Berlin Wall. The Americans say leave him, but Donovan, ever the American, sees a deal of two for one.

Instead of offering a team of rivals, one flaw this critic found with the awards-baity Lincoln, Bridge of Spies forms a cohesive family as Spielberg underplays his direction and lets the actors, story, and artists work in harmony in this fine piece of classical Hollywood cinema. DP Janusz Kaminski is in his element with the blue hues of and dark shadows of Cold War America and Berlin, while composer Thomas Newman is a welcome replacement for Spielberg regular John Williams with a nuanced and stealthy score. The ensemble is very strong, too, especially with Mark Rylance’s masterfully subdued and restrained performance as Abel (the man wears a poker face even as he cracks a chuckle) and Amy Ryan’s reassuring turn as Donovan’s wife, Mary. It’s Hanks’s show, though, as the actor creates an immensely likable negotiator—and one whose intelligence and good character appear with every touch.

Bridge of Spies hinges on the relatable humanity of Hanks’s performance as Donovan becomes a pillar for the values of not only America, but of freedom and liberty as well. Hank’s everyman charm makes Donovan’s plight consistently appealing as he defends the stoic, yet jovial Abel. Hanks is to acting what Spielberg, at his finest, is to directing as the actor/director combo channels an unabashedly American patriotism and sense of values into Donovan’s spirit, yet Bridge of Spies never feels at all preachy or sentimental. The film is proudly American and in an understated way that one just doesn’t see anymore in mainstream American film.

The film’s genuine American pride comes through one of Spielberg’s finest strokes as a director. Bridge of Spies offers two distinct visual contrasts as Donovan travels in Berlin and New York towards the end of the film. In Berlin, he witnesses the inhumanity of this newly divided nation as he and a crowd of passengers on the metro watch a family try to cross the no-man’s land between the walls only to be gunned down in the process. The sight shakes Donovan to his core and reaffirms his duty to free the young Pryor and ensure the safety of Powers and Abel alike. The contrast comes in the film’s finale, which is a masterstroke of direction, as Donovan rides the metro back home. He looks out the window and, once again, he sees rows of walls and fences. They’re not concrete walls and barbed wires, though; they’re homes and picket fences. Instead of escapees navigating a minefield and falling to bullets, Donovan sees boys playing. They jump over the wall, free. It’s hard not to smile with Hanks in turn.

Bridge of Spies is now playing in wide release.