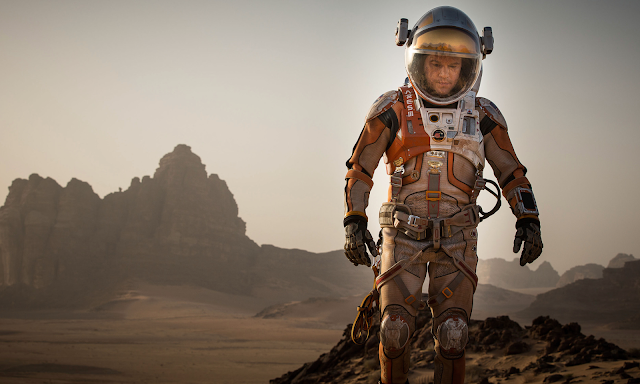 Is there life on Mars? Well, yes and no. The Red Planet is a desolate and barren place in science fiction (and, admittedly, reality) and The Martian is no exception. However, there is life on Mars in this thrilling survival drama from director Ridley Scott (Gladiator) as stranded astronaut Mark Watney (Matt Damon) shows that life endures in even the most unforgiving places. This smart sci-fi film brings the genre back to its roots and takes audiences to space without any of the gimmicks on which recent space outings rely. With or without the 3D glasses, The Martian is a thrilling trip. (This review considers the 2D version.)


Life on Mars is a struggle as the team of the Ares III mission Mars encounters a dangerous storm. Their commander, Melissa Lewis (Jessica Chastain), makes the call to leave, but Watney, presumed dead after a piece of debris knocks him off the grid, is left behind in the sandstorm of spacestuff. With no tools for contact and hundreds of millions of miles between the closet humans, survival seems slim. Watney’s a fighter, though, and he picks himself up with his NASA-grade botanical skills. It turns out that with a few potatoes and a little poop, life on Mars is, somehow, possible. The next mission to Mars is four years away, so that’s a lot of carbs.

Science and logic hardly prevail back at home, though, as the folks at NASA mind themselves in a PR nightmare when evidence of Watney’s survival surfaces shortly after the American Government gives him a cushy funeral. NASA’s director (Jeff Daniels), its chief of Mars missions (Chiwetel Ejiofor), and its Director of Media Relations (Kristen Wiig) all have competing ideas on how best to strategize the mission and, if possible, bring Watney home. Watney’s crew back in space doesn’t know that he’s alive, but science works in Watney’s favour again when a whipsmart analyst devises a shrewd slingshot plan to let the Ares III team save the man they left behind. Science wins, if the team decides to put their own lives at risk.

The Martian, as Dr. Watney might say, “sciences the shit” out of space movies. Regardless of whether the film is factually correct or remotely scientifically accurate doesn’t really matter: it sounds smart and it seems smart, and, better yet, it finds considerable drama by approaching a space mission from the side of numbers, nature, and logic. The Martian puts the science back in science fiction as it asks big questions, not with aliens, but with math. It’s about the possibilities to calculate, test, and push the limits of human life and experience beyond the odds.

The science stuff plays a strong role as Watney defies death by revisiting his basic knowledge and by combining them with his survival skills. The boyish charm of Damon’s screen presence makes the science experiments extra fun as Watney has just as much fun blowing shit up in space as he does growing crops for sustenance. As the self-proclaimed “best botanist on the planet” and the only true renegade space pirate, Watney can (and does) rightfully advise Neil Armstrong to suck it. Moon schmoon.

Damon’s strong performance gives the film significant gravity as The Martian looks to the foundational roots of filmmaking—story and character—to give the audience a compelling objective. The Martian gives complex characters on all sides of this life-or-death drama as everyone in space and on Earth holds a vital stake in the operation and grapples with their own egos and belief systems to find a way to work together. Chastain is especially good as Lewis, who holds a soldier’s perseverance and loyalty as she honours her duty to Watney by seeing their mission through. She’s a strong astronaut in a field of Scott’s notable roster of out-of-this-world heroines, which includes Ellen Ripley and Shaw/Vickers, and her down-to-earth power gives The Martian a fine partner for Damon, as the crew ensuring Watney’s survival is every bit as compelling as he is. On the ground, Ejiofor and Wiig are a smart screen couple while Daniels plays the face of bureaucratic indifference well. The Martian, adapted by Drew Godard (Cabin In the Woods) from the bestselling novel, populates its universe with great characters, twists, and smarts.

There's considerable life on Mars thanks to the care the filmmakers and cast give the world of the characters akin to Watney's attentive potato farming. This adrenaline-pumping and neuron-boosting adventure is Scott’s best film since Black Hawk Down as the director stages some impeccable set pieces on Mars and orchestrates some suspenseful ballets in space. Scott, however, never lets the outstanding visuals overwhelm the film. While The Martian is technically faultless, technical bravura isn’t its endgame. It’s refreshing to watch a major studio tentpole that’s a visual effects extravaganza that relegates the CGI to a peripheral role. The visual wizardry is a marvel, yes, but The Martian knows that empty CGI is meaningless without someone to give it purpose. It’s a relief to sit back and enjoy a space odyssey that doesn’t play like a video game.

The Martian is now playing in wide release.