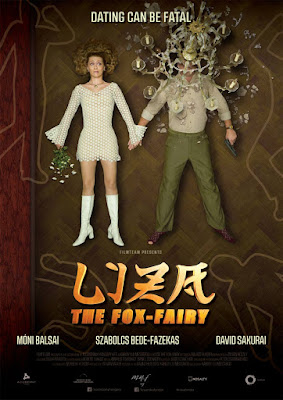 The spirit of the strange and unusual is in the air! Ottawa’s Cellar Door Film Festival returns for its second season and brings the best in horror, sci-fi, and fantasy films to Ottawa. (See the full line-up here.) This year’s festival opens with the enchanting dark fantasy/comedy Liza, the Fox-Fairy at The Mayfair on November 5, and it’s truly going to be a fun celebration of the strange and unusual. Thanks to CDFF, we have a pair of tickets to give away to the opening night screening of Liza, the Fox-Fairy. Answer the trivia below for a chance to win!


Synopsis: Liza, the Fox-Fairy is a sarcastic fairy tale for grown-ups. This hit from the international film festival circuit takes an imaginative flight of escapism when Liza (Mónika Balsai) searches for love. Still single at thirty, Liza has only her imaginary friend, Tomy Tani (David Sakurai), who happens to be the ghost of a Japanese crooner from the 50s, to guide her. Some bizarre dating games ensue, but as Liza’s beaus pile up in a comical body count, it seems that love isn’t in the cards for her. This whimsical and fantastical film takes a speculative twist as Liza’s fascination for Japanese culture gradually burrows deep within her and she sees herself becoming a fox-fairy, which is a demon of Japanese folklore that takes the lives of men. The film offers a fun take on the stigma of spinsterhood as Liza’s power becomes deadlier the more she blossoms from dowdy old-maid to foxy lady. Dark, strange, and sexy, Liza, the Fox Fairy enchants with its black humour and magical aesthetics: the colours of the mythical fairy-world are intoxicatingly vibrant compared to the drab ho-hum burger joints where Liza has dinner for one, while director Károly Ujj Mészáros dresses Liza’s frisky world in fixings tailor-made for the Mad Men crowd. This smart, sophisticated fairy tale opens a door to a world one never wants to leave.

Thanks to Cellar Door Film Festival, Cinemablographer has a pair of tickets to give away to Liza, the Fox-Fairy! All you have to do to enter is answer the following question:

What short film screens with Liza, the Fox-Fairy on opening night at CDFF?

Send your answer and full mailing address to contests@cinemablographer.com with the subject ‘Liza, the Fox Fairy.

Cellar Door Film Festival runs Nov. 5-7 at The Mayfair and Live on Elgin.

*Limit one email entry per person/household per contest. Multiple entries will be discarded and marked as spam.
***Limit one win per person per month.
****Contest open to Ottawa-area residents only.