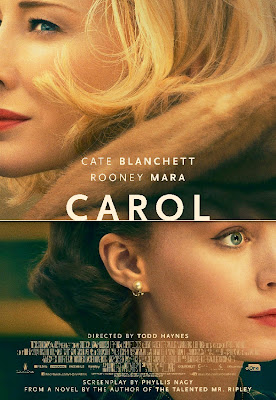 People everywhere are swooning for Carol. This latest film from Todd Haynes (Far from Heaven) adapts the novel The Price of Salt by The Talented Mr. Ripley author Patricia Highsmith (profiled here in the Summer Movie Reads of 2015). Carol stars Cate Blanchett and Cannes Best Actress winner Rooney Mara in two of the performances that critics are calling the year’s best. Carol opens in theatres beginning December 11 from eOne Films, but lucky readers in select cities may win tickets to a sneak peek. Answer the trivia below for a chance to win tickets!


Synopsis: In an adaptation of Patricia Highsmith’s seminal novel The Price of Salt, Carol follows two women from very different backgrounds who find themselves in an unexpected love affair in 1950s New York. As conventional norms of the time challenge their undeniable attraction, an honest story emerges to reveal the resilience of the heart in the face of change. A young woman in her 20s, Therese Belivet (Rooney Mara), is a clerk working in a Manhattan department store and dreaming of a more fulfilling life when she meets Carol (Cate Blanchett), an alluring woman trapped in a loveless, convenient marriage. As an immediate connection sparks between them, the innocence of their first encounter dims and their connection deepens. While Carol breaks free from the confines of marriage, her husband (Kyle Chandler) begins to question her competence as a mother as her involvement with Therese and close relationship with her best friend Abby (Sarah Paulson) come to light.

Thanks to eOne Films, Cinemablographer has a ten (10) double passes to give away for sneak peeks of Carol at the following screenings:

Carol opens in theatres in Toronto and Vancouver on Dec. 11 and in Calgary, Edmonton, Winnipeg, Ottawa, Halifax, and Victoria on Dec. 18.