Contest! Win Tickets to See 'Secret in Their Eyes' Across Canada! (CONTEST CLOSED) 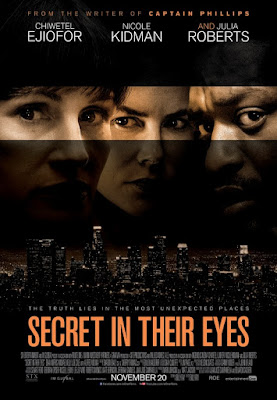 Eyes on the prize! The Secret in Their Eyes, the 2009 Oscar-winner for Best Foreign Language Film, gets a star-studded remake. The film gets a dark Hollywood makeover with the impressive cast of Chiwetel Ejiofor, Julia Roberts, and Nicole Kidman. Will it score Oscar gold too? (I can't wait to see how the one-up the long take!) Secret in Their Eyes opens in theatres November 20, but lucky readers can see it before the film hits theatres!  Answer the trivia below for a chance to win tickets to a sneak peek!

Thanks to eOne Films, Cinemablographer has a 10 double passes to give away to sneak peeks of The Secret in Their Eyes in Ottawa, Toronto, Vancouver, Calgary, Edmonton, Winnipeg.

Which country won the 2009 Academy Award for Best Foreign Language Film for The Secret in Their Eyes?

The Secret in Their Eyes opens from eOne Films on Nov. 20.