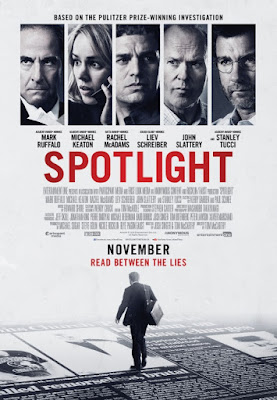 The Oscar race is on! Spotlight leads the pack after wowing audiences at Venice, Telluride, TIFF, where it won a runner-up prize in the race for the People’s Choice Award. Spotlight comes to theatres beginning November 13 from eOne Films, but if you want to see Spotlight before it hits theatres, you are in luck! Answer the trivia below for a chance to win tickets to a sneak peek!


Synopsis: Starring Michael Keaton, Mark Ruffalo, Rachel McAdams, Liev Schrieber, Brian d’Arcy James and Stanley Tucci, SPOTLIGHT tells the riveting true story of the Pulitzer Prize-winning Boston Globe investigation that would rock the city and cause a crisis in one of the world’s oldest and most trusted institutions. When the newspaper’s tenacious “Spotlight” team of reporters delve into allegations of abuse in the Catholic Church, their year-long investigation uncovers a decades-long cover-up at the highest levels of Boston's religious, legal, and government establishment, touching off a wave of revelations around the world. Directed by Academy Award-nominee Tom McCarthy, SPOTLIGHT is a tense investigative thriller, tracing the steps to one of the biggest crime stories in modern times.

Thanks to eOne Films, Cinemablographer has a 10 double passes to give away to sneak peeks of Spotlight in:
Toronto – Nov. 9
Vancouver – Nov. 12
Calgary, Edmonton, Winnipeg, Ottawa, Halifax, Victoria – Nov. 16

Send your answer and full mailing address to contests@cinemablographer.com with the subject ‘Spotlight – [City]’.
~Don’t forget to include your city!~
(Please include only one city in the subject/text of your entry.)

Spotlight opens in Toronto and Vancouver on November 13 from eOne Films and opens wide Nov. 20.