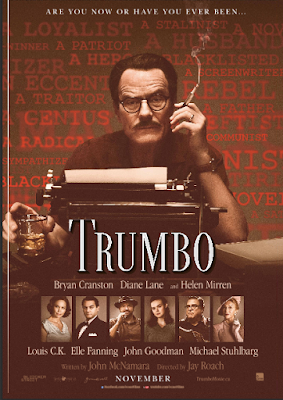 Revisit a chapter of Hollywood history in Trumbo! Trumbo stars Breaking Bad’s Bryan Cranston as screewriter Dalton Trumbo, who penned some Hollywood classics in the notorious age of the blacklist. Trumbo opens in theatres November 27 from eOne Films, but lucky readers can see it before the film hits theatres!  Answer the trivia below for a chance to win tickets to a sneak peek!


Synopsis: In 1947, Dalton Trumbo (Bryan Cranston) was Hollywood’s top screenwriter until he and other artists were jailed and blacklisted for their political beliefs. Trumbo (directed by Jay Roach) recounts how Dalton used words and wit to win two Academy Awards and expose the absurdity and injustice under the blacklist, which entangled everyone from gossip columnist Hedda Hopper (Helen Mirren) to John Wayne, Kirk Douglas and Otto Preminger.

Thanks to eOne Films, Cinemablographer has a 10 double passes to give away to sneak peeks of Trumbo in Ottawa, Toronto, Vancouver, Calgary, Edmonton, Winnipeg, Halifax and Victoria.