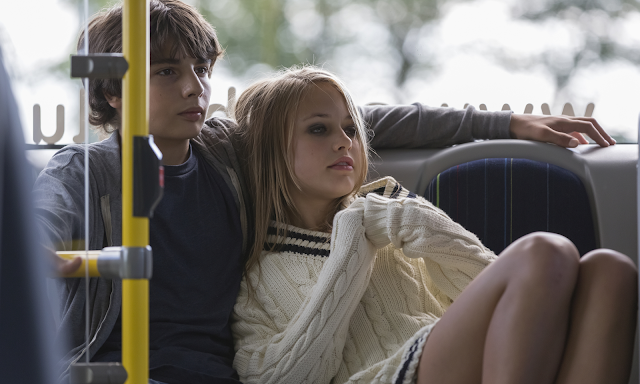 The kids are not all right in Baby(a)lone. Baby(a)lone opens this year’s European Union Film Festival in Ottawa and it’s much darker and edgier than past festival openers have been. Baby(a)lone might not be the first film with which one expects a country to represent itself at an international showcase, nor at the Oscars where the film is Luxembourg’s submission for Best Foreign Language Film, but it’s brave of Luxembourg to be so bold. The film is bound to strike a nerve with some festivalgoers, especially parents, but the tough rawness of Donato Rotunno’s direction gives Baby(a)lone a potent sting. It’s an uncomfortable watch—and an urgent one.


Baby(a)lone tells of a young Luxembourgish boy (Joshua Defays) who struggles at school and receives no guidance at home. The boy could be anyone with his anonymity—he literally has no name—and his story is one of many in a fast-paced/oversexed/narcissistic selfie culture where kids run wild. Sparks fly as teen hormones charge between the kids. They drink, smoke, run away, and burn one another with cigarettes. And wait until you hear their language!

The boy is having trouble at school because kids keep teasing him about his mother’s sex appeal and her presumed promiscuity. That’s not cool by any measure, but neither is fighting back by cracking a lead pipe to a kid’s head, which is how the boy retaliates.

It turns out that the boy’s mom (Fabienne Elaine Hollwege) isn’t in the running for Mother of the Year after all. She runs a webcam sex show from their apartment and, from the sounds of it, a one-woman brothel. His father, on the other hand, abandoned the family years earlier, so it’s no surprise that the boy lacks guidance and has a warped perception of women as sexual objects. The boy gets schooled in the latter when saucy Shirley (Charlotte Elsen) joins the school’s special class for troublemakers. Shirley’s tragic story of her troubled upbringing reveals a child taught early on that her body is a commodity.

Rotunno teases out the imaginary existence of Jimmy as Jimmy becomes more like a devil on the boy’s shoulder as he pushes back against the school that tries to tame him. Effective use of blocking and reflection lets Jimmy’s influence linger over the boy as he and Shirley muse about sex, escape, and the future. The double, or ghostly presence that hovers over the boy, is one of few formal elements that shape the even-handed portrait of the lost boy. The film finds its power in the urgency of its tale and the strength of its performances, which are impressive given the youth of the leads.

Shirley and the boy live like the Bonnie & Clyde of the high-school crowd. Their story takes a dark and unexpected turn as their recklessness goes undisciplined. They realize the consequences of their actions far too late. As the two kids flee the school and defiantly escape the adults who try to help them, Baby(a)lone creates a portrait of reckless, directionless youths who see life as nothing but a hedonistic carnival ride. Director Donato Rotunno uses this image rather effectively in the film’s final shot, a doozy of a closer that brings the kids’ joyride to a bleak finale that turns the good times of the ride into a cruelly ironic cycle.

Rotunno keeps the tone edgy without being too salacious or extreme. Baby(a)lone charts taboo territory as it touches upon teen sexuality, underage drinking, and substance abuse, but the onscreen action doesn’t push too far. The film uses restraint and effectively so, as Baby(a)lone turns the audience’s focus not to the sordid behaviour but to the lack of guidance the kids have in their lives. Baby(a)lone is not a cautionary tale of juvenile delinquency, but rather a portrait of a lost generation that demands attention.

Baby(a)lone screens at the European Union Film Festival on Friday, Nov. 20 at The ByTowne.
Please visit www.cfi-icf.ca for more information.

It also screens at EUFF Toronto on Saturday, Nov. 28 at The Royal.