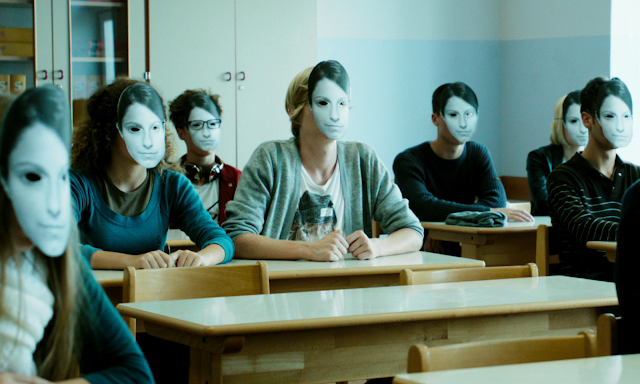 The European Union Film Festival finds a fitting follow-up to Luxembourg’s unsettling drama Baby(a)lone with Slovenia’s provocative drama Class Enemy. Both films are uncomfortable portraits of youth in revolt, but while Baby(a)lone finds power in the urgency of its character study, the group rebellion of Class Enemy situates the film in a larger collective uneasiness passed from generation to generation. This feature debut by Rok Bicek, Slovenia’s bid for Best Foreign Language Film back in 2013 (when Youth director Paolo Sorrentino's The Great Beauty won) is a powerful high school drama about ghosts that linger and lessons we all must learn.


Class Enemy features a group of high school students who are tamed by their motherly German-language teacher (Masa Derganc) until she goes on maternity leave and puts the class in charge of a new teacher, Robert Zupta (Igor Samobor). Robert clashes with his students in an instant, especially Luka (Voranc Boh), who recently lost his mother, and Tadej (Jan Zupančič), who just seems like a rebel at heart. The students dislike Robert’s formality and insistence on traditions, such as standing out of respect for a teacher and raising one’s hand to speak. Robert and his students both seem ignorant of the concept that one needs to show respect in order to demand it, and both sides of the classroom face off in a standstill as tensions mount between the teacher and his students. The demeanour between the two teachers couldn’t be more different, for the first teacher shows warmth and compassion to the students, while Robert is cold and almost clinical in his approach to their studies.

The problem explodes when Robert takes an interest in one bashful student, Sabina (Daša Cupevski), with whom he shows a shred of humanity until a classmate walks in on an intimate, but arguably innocent, moment. Robert then turns on Sabina in a moment of absolute cruelty and administers a lesson in semantics that completely debases his pupil. Then film takes an unexpected gut-punch of a twist, and the class collectively turns on Robert and blames him for a tragedy that nobody should encounter. Cries of “O, Captain! My Captain!” are nowhere to be found.

Bicek draws stylistically from films like 4 Months, 3 Weeks, and 2 Days as the handheld cinematography by Fabio Stoll favours long takes. The restrained jitteriness of the camerawork lends the film an immediacy and uneasiness, while the subdued natural lighting schemes make the school a bright, but cold institution. The film unfolds its tension with a slow simmer, if a little too slowly, and the measured pace makes the strain between Robert and the students a bulging powder keg.

Class Enemy creates a fascinating dynamic as both the teacher and the students use a tragedy to further their own agenda. The students, some of whom barely know of Sabina’s existence, jump at the chance to defy their teacher. They take a stand against “the system,” they say, and broadcast charges of Nazism over the school radio in an act of disobedience that would see them expelled under any other circumstances. The students’ frustration with Robert amplifies as he speaks sharply to the class in German, and the language echoes simmering tensions amongst the Slovenian students about memories of Nazism as they confuse Robert’s demanding coldness with sadism. Similarly, Robert becomes colder and more calculating as his students hit back. He uses the tragedy as a springboard for larger lessons on German culture and literature. The act seems either insensitive or intelligent, depending on which side of the classroom one observes.

Strong performances from the ensemble, especially the natural turns from the core group of students who form the rebellious bunch, make Class Enemy a compelling film. The contrasting performances of Samobor and Derganc as the two teachers, the latter of whom receives a cruel shot from her students in an interaction that shifts the dynamic out of the students’ favour, offer a range of leadership styles as the teachers sit in a broad scope of impersonal detachment to compassionate care. (As the principal, Natasa Barbara Gracner offers a worthy midpoint of pragmatism between the two.) The divide between the teachers and the students ensures that a viewer must take his or her time while finding an ally within this complicated dynamic. What Robert does is awful, but the students’ rally devolves into dangerous groupthink. They can’t properly articulate the reason for their ire, other than that Robert is a bully and a Nazi, so their actions seem less rational as they become more radical. Without finding an ability to sympathize with Robert due to his detached coldness, the film leaves the audience looking at a collective rift in need of repair.

Class Enemy screens at EUFF on Tues, Nov. 24 at The ByTowne at 8:50pm.
Please visit www.cfi-icf.ca for more information.

It screens at EUFF Toronto on Wed., Nov. 25 at The Royal.