EUFF Review: 'A Pigeon Sat on a Branch Reflecting on Existence' 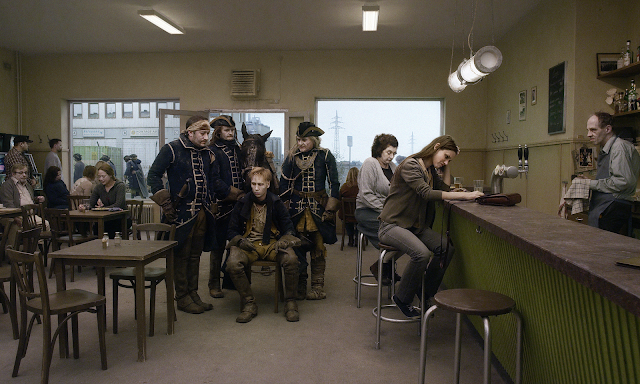 
This truly bizarre absurdist comedy is dark humour at its finest. Andersson ruminates on life, death, and the futility of understanding either one in a series of vignettes that comprise two loose and largely unrelated narratives. (Both stories follow a trio of death scenes that begin the film akin to an episode of HBO’s Six Feet Under.) One story features hapless novelty salesmen Sam (Nisse Vestblom) and Jonathan (Holger Andersson), while the other resurrects King Carl XII (Viktor Gyllenberg) as the Monarch leads modern-day Sweden into a latter-day war (and picks up a few chamber boys en route to battle). Andersson shoots each vignette as a tableau shot, capturing the scene in its full scope and focus, as a long take lets the action, like life itself, play out in full force. Much like a pigeon gazing out at the world from a distance, one watches the humans scuttle about as they keep busy and drive themselves mad while the observer derives great pleasure from watching them scramble. (Andersson says the title comes from a Renaissance painting featuring hunters in the woods with birds sitting on treetops in the background.)

The scenes are very funny with their randomness and, in many cases, overall pointlessness as Swedes peddle vampire teeth, drink pints in the pub, or troll the streets in search of a meeting that never happens. The staging and dialogue largely plays the action straight, and the absurdity of the humour comes through the sheer incongruence or pettiness of the actions that transpire on screen. The scenes are generally a bit too long, which allows the comedy to wash over the viewer and pull him or her into the scene, becoming both an all seeing-eye to the action and a party to the mundane stuff that transpires. It's meditative, yet actively involving in its own detached way. Each vignette is its own canvas with which one may reflect upon existence—reflecting either on life or why the scene appears in the film at all.

A Pigeon Sat on a Branch Reflecting on an Existence even throws in a droll musical number in which barmaiden Limping Lotta (Charlotta Larsson) sings about the price of shots whilst gimply parading from table to table pouring shots a-plenty for the men who sit in her watering hole. Lotta’s pub is one of the few things that endure as the seasons change in Pigeon and Andersson invites another number in 1943 where the cash-strapped soldiers pay for booze with kisses. Drinking, flirting, and novelty are the connective tissues of the film.

Embrace the gallows humour and overall randomness of A Pigeon Sat on a Branch Reflecting on Existence and one is in for a wild, truly unique experience. The film forms the third and final chapter in Andersson’s “The Living Trilogy,” but one need not have seen Songs from the Second Floor (2000) and  (2000) and You, the Living (2007) to appreciate what a deep and funny canvas Andersson uses to capture life in all its absurd wonder. It’s an arthouse hoot.

A Pigeon Sat on a Branch Reflecting on Existence screens at EUFF on Saturday, November 28, 2015, 6:35 pm at ByTowne Cinema.