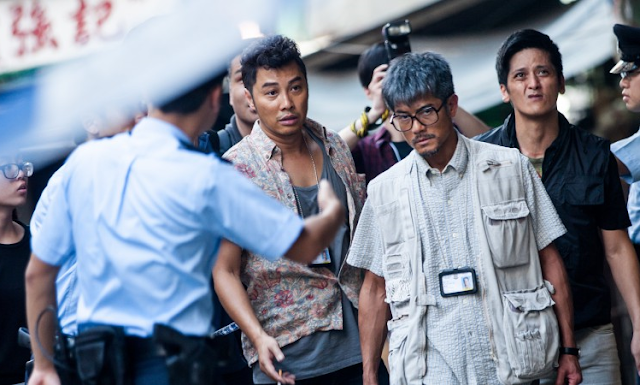 Canadian audiences should prepare to squirm and shudder as the grisly crime of Port of Call recalls the grotesque deeds of Montreal murderer Luka Magnotta. Nothing quite tops the stomach-churning depravity of the headline-making cannibalism that went online, but as far as real world dramas go, the Hong Kong crime drama Port of Call offers enough ghastly stuff to make the squeamish hurl. Viewers with a strong sense that humans are innately good might blow chunks too, since the murder case based on true events drives some troubling questions about the nature of humankind. Has the ship of human decency left the port?


The bleakness of Port of Call is entirely the point, though, as Detective Chong (Aaron Kwok) finds himself troubled by a brutal murder case in which a man in his twenties takes the life of a teenage prostitute and then butchers her into bits and disperses her remains to and fro. The deed is absolutely sick, but what revolts Chong more is a motive behind it. The killer, Ting (Michael Ning), simply says that the girl, Jaimei (Jessie Li), spoke four words before he killed her: “I want to die.” Whatever possesses someone to commit such a heinous deed, and whatever possesses someone to seek a death sentence, are two enormously weighty questions for anyone person to bear, let alone at the same time.

This film by Philip Yung, which serves as the Centrepiece for Toronto’s Reel Asian Film Festival and carries a boatload of nominations at the Golden Horse Awards (like the Oscars of Chinese-language films), gives ample dramatic weight to everyone who intersects with the case. Be it Chong, Ting, Jaimei or, most effectively, Jaimei’s mother (Elaine Jin), Port of Call offers a myriad of fragments that come together like a ruptured puzzle-mosaic. It’s not a complete picture, but as Chong’s exhausting philosophical quagmire reveals, one can never truly make sense of a case like this one.

The film shifts perspectives as title cards break the film into chapters and shift chronology as Port of Call jumps back and forth in time. Yung turns the stories back on one another as the segments feature an element of storytelling as characters give their accounts on Jaimei’s behaviour before her death. The scenes with Jin as Jaimei’s mother are the most compelling as she reels from the inconsolable loss of her daughter. The most brutal element of Port of Call is not the violence, but the mother’s grief, which cuts deep like a nice thanks to Jin’s excellent performance.

As the killer, Ning is eerily subdued and rational. Like Hannibal Lecter with an inferior intelligence, the killer’s docility is unnerving. When he finally gives his full testimony on how he butchered and dismembered Jaimei and disposed of her body, his even-keeled account eerily lacks both empathy and evil. It’s impossible to understand these actions.

Yung overdoes the violence and gore a bit too much during the climactic testimony as the film flashes back to the murder and shows Ting chopping Jaimei into bits, hacking her bones, and bathing his apartment in blood as if it’s a killing room floor. The sequence is relentlessly and mercilessly graphic—understandably so given the nature of the case—but it seems gratuitous when juxtaposed with Jin’s wrenching turn as the mother listens to details of her daughter’s dismemberment.

Jaimei gets her moments later in the film once people have spoken and speculated about her disappearance. Played by a charming Jessica Li, Jaimei has a mix of innocence and desperate escapism. She tries her hand at modelling, but it only leads to prostitution. The film ends by emphasizing Jaimei’s life and optimism, not her death and the sadness that invited it. Yung lets the audience appreciate what they’ve lost in the brutal stories beforehand by returning the story to an image of Jaimei’s family before violence tore them apart. The move anticipates future losses.

Port of Call is a dark tale and Yung works with master cinematographer Christopher Doyle to create a world that is bleak and gritty. Doyle’s stylish cinematography is ominous and deadly; moreover, it’s disarmingly detached as the camera often looks at character askance rather than confront them head-on. The visuals are another angle in a film with so many perspectives. These competing perspectives build a singular vision: one doesn’t really know someone until it’s too late.