'The Assassin' is Beautifully Boring 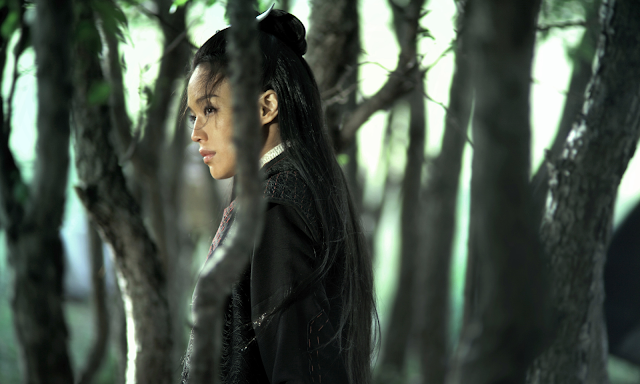 Wuxia films can be a grand affair as marital arts masters and soaring swordsmen trade blows and defend their honour in elaborate action sequences and set pieces. Take Ang Lee’s Crouching Tiger, Hidden Dragon, arguably the best martial arts film ever made, which flies to fantastical heights as warriors cross swords in duels that play like treetop ballet, or Zhang Yimou’s Hero, another gorgeously realized film about the futility of living by the sword. Add Hou Hsiao-Hsien’s The Assassin to the list of notable wuxia films, but this one stands out for very different reasons: it barely contains any action. Call it a pacifist action film, maybe. It's an acquired taste despite the gorgeous packaging.


The Assassin, Taiwan’s submission for Best Foreign Language Film in this year’s Oscar race, is more gorgeous than any film this year frame by frame. The detail of Hou Hsiao-Hsien’s masterfully ornate recreation of 9th century China is immaculate and the filmmaker transports audiences to a place and time that’s wonderfully cinematic. The film—aesthetically, anyways—is grand.

Every fame of the film is deadly gorgeous thanks to cinematographer Mark Lee Ping Bing and his ability to make the colours of the natural greenery pop out like darts fired by trained killers. (A fight among birch bark, for example, is a beautiful killer.) The elaborate costumes and sets by Hwrang Wern-Ying vividly recreate the old world with a perfect eye for detail. Not one element of the elegance of 9th Century China is spared. The score by Lim Giong is both elegant and ominous with measured notes in the lower scale drumming a layer of tension that the story often lack, while the phenomenal sound design has the senses on alert from all direction as one hears slight cues that signal danger and death. The direction times the action precisely and uses all the elements at the film's disposal to set up every shot beautifully. Every piece of The Assassin’s technical and artistic work is faultless.

The film opens with a gorgeous black and white prelude and then converts to a vibrantly coloured drama shot mostly in the Academy ratio of 1.33:1 as The Assassin follows a young girl named Yinniang (Shu Qi) receives training from a nun to become an assassin. Yinniang is stealthy and deadly, but she botches an assignment early in the film. She has a code and the film shows that won’t kill a man with a child in his arms. She’s an anomaly among assassins.

Yinniang’s new task becomes a cruel punishment when the nun sends her back to her home country with an assignment to kill her cousin, Tian Ji’an (Chang Chen), the governor of the province. The Assassin plays out Yinniang’s assignment with measured theatricality as the performances, particularly the male advisors of the court, draw out the elements of drama and storytelling of the period in which the film is situated. The film dances around the action and teases the confrontations between Yinniang and Tian Ji’an, which makes the film more of a moral fable than an action film. The few marital arts scenes that appear in the film often leave much to be desired. Shot with barely any close-ups, The Assassin rejects the blow-for-blow intensity of its peers and the visceral escapism of action-based entertainment. Hou Hsiao-Hsien opts for a more philosophical approach to the world of the sword. The Assassin finds a code of honour in Yinniang’s keen intuition for when to wield her sword and when to retire it. The film advocates against violence by withholding it from the film and downplaying its role in the wuxia world.

The pacifism of The Assassin is admirable, but the calculations of the storytelling don’t match the technical and artistic prowess. Simply put: The Assassin is unbearably slow. The docility of the film is too much. It’s almost taxing. People talk about action and inaction, but nothing much happens and the first half of the film almost passes as an unintelligible blur. The Assassin is almost defiantly slow. Hou Hsiao-Hsien’s rejection of close-ups also backfires with its distancing effect, as the film becomes cold and uninvolving even as remains intoxicatingly beautiful. This beautifully boring film, like the assassin at its core, is an anomaly.

The Assassin opens in Ottawa at The Mayfair on Nov. 14.
It’s currently screening in Toronto at TIFF Lightbox.