Blu-ray Review: 'Sleeping with Other People'

Sleeping with Other People
(USA, 101 min.)
Written and directed by Leslye Headland
Starring: Jason Sudeikis, Alison Brie, Adam Scott, Amanda Peet
Boy meets girl, they sleep together, they part, and then fate has them come together. It’s a familiar story that returns again and again because, well, it works. Sleeping with Other People does the unrequited mojo thing with a contemporary openness and a progressive attitude for polyamorous relationships as fellow studs/”love addicts” Jake (Jason Sudeikis) and Lainey (Alison Brie) cross paths years after they first hooked up in college and never danced between the sheets again. Add a sprinkle of darkness and characters who are fallibly real, and Sleeping with Other People manages to be a romantic comedy for people who don’t usually like romantic comedies, but without being cynical about love too.


Jake and Lainey, see, were each other’s first partner. Losing it together gives them something to reclaim as they meet again when they’re both hoping to get their grove back. The problem, however, is that Jake and Lainey actually get along pretty well when they finally get to know one another in a non-sexual way. They both use sex to escape close relationships and now that they enjoy being close, they worry that getting that much closer [makes a little space between thumb and index finger] will mess everything uo. Discovering a kind of intimacy both previously assumes to be synonymous with sexual familiarity, Jake and Lainey explore new territories as Sleeping with Other People builds ample sexual tension in an appealing will-they-or-won’t-they rom com.

Sudeikis and Brie have fun chemistry as Jake and Lainey. There’s an obvious attraction between the two characters and Sleeping with Other People thickens the sexual tension as the two recount stories of their emotionally unattached sexual escapades with other partners. Along the way, they offer each other sex tips, like how a girl can give herself an orgasm (Lainey’s never done it), and they come ever so close to taking the step from friends to “friends”. It’s When Harry Met Sally meets My Awkward Sexual Adventure as Jake and Lainey make an obvious pair, but flirt with other distractions, including Jake’s sexy boss Paula (Amanda Peet, who’s great in a smaller role) and Lainey’s long-term fuck buddy Matthew (Adam Scott, playing the role of the d-bag perfectly sleazy).

It’s all a little uneven with the mix of rom com sweetness and roundabout raunchiness as Jake and Lainey have explicit and anatomically inclined convos about the birds and the bees as they dance around the sex they wanna have but are avoiding. The better stuff comes when Jake and Lainey don’t have sex on the brain, like a visit to a friend’s kid’s birthday party where they both get high and Lainey leads the kids on dance number that’s just a little too sexy and a whole lotta fun. Ditto the awkward dates with other people, which have some cringe-worthy moments that could rightly turn either one away from love.

Sleeping with Other People, however, might haven tickled the funny bone (or funny boner, in this case) if writer/director Leslye Headland actually toned down the explicitness of the material and favoured the path of innuendo. She carefully avoids shock value in Jake and Lainey’s jams about the birds and the bees, but more implication would better serve the sexual tension and the comedy at the same time, like Jerry and Elaine talking about this and that without getting the other that thrown into the mix. It’s nevertheless an amusing, sweet, and funny film in its own right. The film makes great use of its New York settings and Headland once again shows that she has the stuff for ensemble comedy, as Sleeping with Other People boasts a quartet of strong performances full of zip and raging hormones.

Sleeping with Other People marks the sophomore feature by Headland following her raunchy 2012 breakout Bachelorette. Sleeping with Other People, unlike the come-from-nowhere sass of Bachelorette, carries the weight of expectations that are somewhat difficult to meet. As a standalone film though, it’s a good roll in the hay for film fans who have yet to experience the zany charm of Headland’s first film. Bachelorette fans may also appreciate Headland’s willingness to take the rom com into darker territory, while the fullness of both the male and female characters makes the film a refreshing anomaly in the world of sugarcoated love stories. Sleeping with Other People is especially recommended for single people with cats this New Year’s. 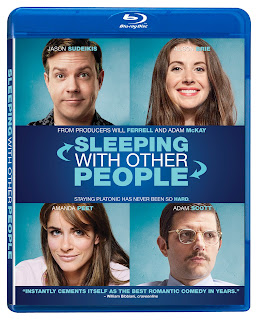 A/V: The 1080p 2.40:1 widescreen transfer is bright and refreshing, and the Dolby 5.1 True HD audio gives the film’s repartee a crispness to match the actors’ timing.

The extras: Sleeping with Other People offers a smorgasbord of cast and crew interviews. There’s roughly an hour of material with Headland, Brie, Sudeikis, Peet, Scott, and co-star Jason Mantizoukas, most of whom are naturally funny and gab about their characters with the same energy they display in the film. The interviews might have benefited from a little editing, but Headland’s segment is especially good at highlighting the fullness of the characters and the relatability of the material. An additional behind the scenes featurette shows the stars in action during shoots for some of the film’s bigger scenes, including a backstage look at Brie’s zany birthday party dance, which looks like it was just as much fun to shoot as it is to watch.

Sleeping with Other People is now available on Blu-ray, DVD, and digital from VVS Films.