Ed Skrein is to Jason Statham what margarine is to butter. The Transporter franchise gets a reboot (or a “refuel,” in this case) and it lathers a substitute in place of the rich ingredient that makes the original Luc Besson movies so entertaining. Skrein, while perfectly serviceable, doesn’t bring quite the same charm, humour, and ruggedness to the role that Statham does. The Transporter: Refueled is still more palatable than dry toast even if it has the margarine man at the helm in place of Jason Statham, but the Transporter goes meterosexual as he escorts girls at high speeds and fights with a shopping bag and an iPhone instead of high-calibre guns.

The franchise, like the Fast and the Furii flicks, mostly needs only passengers though since it’s more about the action than it is about the man. Refueled still provides the same mindless escapism with which the Transporter franchise burns rubber. Pedal to the metal with buds and brews.

The film offers both a sequel and an origin story of sorts as Skrein plays a younger Transporter, the anonymous chauffeur who gets shit done, who takes an assignment from Anna (Loan Chabanol), the ringleader of a quartet of girls in search of revenge. They recruit/coerce the Transporter and his dad (Ray Stevenson) to help them take on a sex-trade racket known as Le Coeur Brisé, which forces women into prostitution. Cue the girls and guns as Refueled offers a few nifty revenge scenes and some gratuitous girl-on-girl action—is it really necessary for some make-out sessions after setting fire to some corpses?—and the film moderately succeeds at adding strong female characters to the scene while still catering to the male demographic.

The girls play backseat drivers (on several levels) to the Transporter’s action chops as the film careens them around France in a sporty Audi, evading baddies and catching sweet air whilst jumping jumbo jets. Refueled more or less abandons logic once the action pushes into high gear mid-way through the film with an eye-catching heist sequence at a nightclub. The scene features a lengthy martial arts battle with Skrein, a table, and four moderately inept guards as some nifty camerawork creates a stylish barrage of rough and tumble action. Once the gang flees the scene, Refueled takes them on a full throttle chase that doesn’t let up. It’s all a little ridiculous and over the top, but it’s a guilty pleasure for anyone looking for action-heavy escapism. There’s no harm in refuelling every now and then! 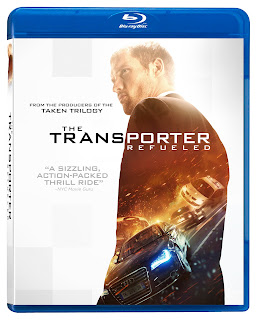 Bonus features: Three extra perks tackle a trio of the film’s highlights. The featurette “La Coeur Brisé: Les Femmes of Refueled” focuses on the actresses in the film and the characters they play, while “Frank Martin: The Reluctant Hero” lets the cast and crew talk about Ed Skrein’s commitment to the role with ample footage of his preparations in stunts and strength training. “Rocketing from 0 - 60,” probably the one bonus of the three most worth watching, gives a behind-the-scenes look at the awesome stunt driving. It’s also a great commercial for the Audi S8, which really deserves its name in the opening credits.

The Transporter: Refueled is now available on Blu-ray, DVD, and digital from VVS Films.