EUFF Review: 'Closer to the Moon'

Closer to the Moon 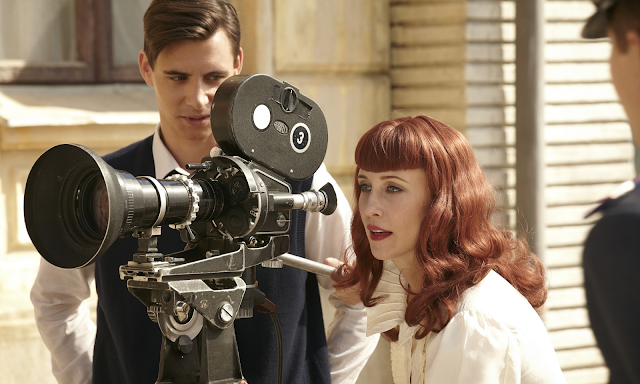 The words “commercial Romanian film” might sound like an oxymoron, but Closer to the Moon displays a remarkable development for the Romanian film scene. This stylish caper dramatizes the bizarre-yet-true story of a bank heist in 1959 Communist Romania, and it shows a whole different side of the potential for Romanian cinema that’s been burgeoning since the New Wave broke out internationally with 2007’s 4 Months, 3 Weeks, and 2 Days. Closer to the Moon harnesses the possibilities of international co-production and re-invents this slice of Romanian history with the slick entertainment value of a Hollywood heist movie, but it has the style and substance of an international art film. It’s a fun, entertaining revelation.

Closer to the Moon, appropriately enough, feels like a natural choice for such an endeavour since it puts the magic of the movies at the core of its peculiar farce. The film tells of a peculiar case in which the Romanian government forced five convicts to re-enact a bank heist for a documentary, which would then be used as a propaganda tool for the Communist Party. Director Nae Caranfil catches the absurd pulse of the scenario just right by balancing a tone that mixes drama and comedy, as the five convicts assume control of the production in an enjoyable lark of rebellion.
The five robbers feature some familiar faces with Vera Farmiga (Up in the Air) playing Alice, the smart, saucy woman at the centre of the gang, and Mark Strong (The Imitation Game) as Max, the moody ringleader who takes charge of the mission. The film also features British actors Christian McKay (Me and Orson Welles) and Harry Lloyd (The Theory of Everything) as a supporting player in the robbery and the young cinematographer who shoots the propaganda doc, respectively. Closer to the Moon lets the actors play their roles with their respective accents, save for Farmiga, who tries something new, and it favours escapism over authenticity, but largely in service of both the story and the audience.

The film plays out in eight chapters, most of which appear through the lens of Lloyd’s inquisitive cameraman Virgil. Virgil actually aspires to be a filmmaker when he sees a grand shoot happen in the street outside his café one fateful day in 1959: it’s a film shoot of a bank heist complete with a camera operator capturing the action from afar and signs saying ‘Quiet on the set!’ near the bank. It turns out that the shoot is all a charade, for movies can make the masses believe anything. The film shoot, really, is simply smokescreen for the bank robbery executed by Max, Alice, et al. Ironically, Virgil gets to make a movie about the film that inspired him.
As Virgil documents the trial in a series of dizzying zooms and pans, his eye catches something that slips through the utter circus of the trial: the evidence doesn’t match the events he witnessed with his own eyes. The Communists say that the bank robbers, who are also Jewish WWII Resistance members, are dangerous and violent, yet Virgil knows that they heist occurred with nary a shot, save for Alice wildly firing some rounds into the air. If anything, Virgil knows that the robbers put on a show that the crowd gladly watched from a distance.

The gang puts on a show again as the farcical re-enactment of the film within a film lets the Resistance fighters subvert the authority of the Communists once again. The dark humour of Closer to the Moon shrewdly pits the Communist government as an unruly circus. Alice becomes especially cheeky on the film set and relishes the role of the diva to let the boys know who’s the boss, while Max takes the opportunity of the escape from prison to communicate with Resistance members in the outside world. Virgil observes this drama all the while through his camera, and his all-seeing eye finds details that the prosecution fails to grasp as it chronicles the story of the film shoot. The mystery that underlies the film shoot remains a central question: Just why did they rob the bank in the first place?

As Closer to the Moon leads up to this revelation, the film plays with history and drama with a hand for the formal dexterity that film buffs will appreciate from this corner of the film circuit. Closer to the Moon layers fact and fiction with opposing gazes for the world Virgil sees through his naked eye and the world he sees through his camera. One acts as a unique filter that reveals the artifice of the order around him. Bucharest is really just a soundstage of its own mythmaking as the “real” world is as much about putting on a show as the film shoot it. Handsome cinematography Marius Panduru creates an effective contrast of reality and cinema, and stylishly rejects the drab kitchen-sink atmosphere with which one might imagine Communist-era Romania, while smart costumes by Doina Levintza add a splash of Hollywoodized history. (The Betty Page wig for Farmiga’s Alice is a fun accessory.)

Strong performances from the international cast, especially Farmiga and Lloyd, play well with the tricky tone of the film as Closer to the Moon tasks the cast with drawing out a farce by playing an episode of history with the utmost seriousness. Smaller players like Allan Corduner (Topsy-Turvy) as a boozy film director broaden the film into more outward comedy, as do a roster of bit performances by actors playing judges, lawyers, and officers of the Communist party. Closer to the Moon never claims to be a factual representation of history as it thoroughly relishes the opportunity to embellish it. The stylishness of the film finds a fitting contrast with actual footage from the real 1960 documentary about the heist, which plays during the final credits. As drama and documentary collide, Closer to the Moon exemplifies the claim that truth is stranger than fiction, but shows that each one is a lark in its own right.


Closer to the Moon screened in Ottawa at the European Union Film Festival on Nov. 30 at The ByTowne.
It is also available to rent on Google Play.