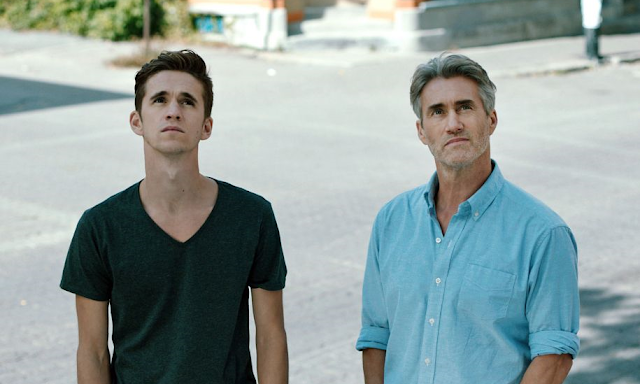 It’s funny to look at two of the Roy Dupuis films reviewed this year and see how much they encompass the world of Canadian films. In There Where Atilla Passes… Dupuis stars as Michel, the Québécois father of a Turkish boy named Atilla (Émile Schneider) who feels a pull away from his father when the directionlessness of his path makes him reconsider his idea of home. Dupuis plays father to a son in a similar predicament in this summer’s The Sound of Trees (Le bruit des arbres) in which his logger papa sees his son Jérémie (Atoine L’ Écuyer) feel a pull away from the regional homeland and toward the big city of Montreal. The difference, though, is that Atilla carries a fascination with his native Turkey, while Jérémie feels restless on the farm, yet both films feature father/son dynamics in which the idea home no longer holds sway for the young generation. Be it Montreal or Turkey, these two Roy Dupuis films show Canada as a site of generational divides.


Both There Where Atilla Passes… and The Sound of Trees also encompass specific branches of Canadian cinema that offer invaluable diversity and representation for a film scene that still sees too many films by and about Toronto. While Trees has a refreshing regional flavour to its slice of life look at rural Quebec (and it’s even better as a look at a life that’s setting with the sun), Atilla makes a notable entry for Canadian cinema by offering one of the first stories—if not the first story—about a Turkish-Canadian looking for a sense of belonging in his adopted homeland of Quebec. Both films are very much about isolation and the dangers of living within the bubble of one community. The boys grow up by looking beyond the borders of their familiar circles.

This drama by Onur Karaman (La ferme des humains) begs comparison to Ruba Nadda’s 2005 breakout hit Sabah with its urban tale of multiculturalism and personal awakening. There Where Atilla Passes… stars Émile Schneider as the twentysomething Turkish-born/Canadian-bred Atilla, who resembles a cross between Jérémie of Trees and Arsinée Khanjian’s Sabah as he reconsiders his idea of home by putting his idea of himself as a Turkish-Canadian into perspective. The change happens at a peculiar time when his mother Julie (Julie Deslauriers) randomly decides to up and leave the family home. Left with Michel, who undergoes his own mid-life awakening when his wife’s departure inspires him to pursue his dream of opening a restaurant, Atilla wonders where exactly he fits in with this Montreal family. He feels alone, much like his grandfather who lives by himself at a retirement home. Seeing his grandfather more frequently once Julie leaves, Atilla desires to hold onto the memories he still remembers as he watches memories fade from his grandfather’s mind.

Atilla receives a nudge from afar when he gains a Turkish co-worker Ahmet (Cansel Elcin) at the restaurant where he waits tables and works as a kitchen hand. Ahmet tries to speak with Atilla in Turkish—that mother tongue that seems so foreign to him here in Canada. Gradually, with fewer prompts and fewer retreats to français as the conversations progress, Atilla confronts the cultural heritage that lives acknowledged in his life. When Ahmet introduces Atilla to Turkish exchange student Asya (Dilan Gwyn), his idea of the homeland moves beyond romanticism into a full-blown long longing to return and begin again.

Atilla somewhat finds himself in Atom Egoyan territory as his preoccupation with his hyphenated Canadianness leaves feeling isolated and as if he straddles two worlds. The more Atilla longs to reclaim his Turkey roots, the more his memories of the past haunt him. Karaman intercuts the film with flashbacks to Atilla’s mother, a singer, and the traumatic fragments of memory that exist from his childhood shortly before he left Turkey to live with Michel and Julie. Returning to Turkey entails a reconciliation with the past, and the shards of flashbacks collide with Atilla’s own conflicted love for Michel and Julie. How this young boy determines his own legacy and place in the world is quite the subtle struggle as he wrestles with his love for a world he knows only in pieces of memories and with his relationship to a land with which he feels no connection.

Schneider gives a compelling performance as the young Atilla, while Dupuis is very strong as Michel. (Dupuis is having quite the year with Atilla, Trees, and The Forbidden Room.) Atilla’s father forms the heart of the film as he longs to bridge the distance he senses dividing him from his son, and the running theme of the restaurant and its promise of renewal and family legacy offers a strong metaphor for the endurance of Michel and Atilla’s family. Gwyn also gives a likable turn as the radiant Asya, while Deslauriers makes Julie sympathetic and appealing. The fleeing mother could easily have been a cause for concern, but the overall theme of the film is one of suffocation and escape. Regardless of where one calls home, one might always feel a pull to go elsewhere. This drive is universal and There Where Atilla Passes… shows that these journeys are opportunities for growth, for one evolves by expanding one’s horizons. There Where Atilla Passes… is a modest, moving family drama about the worlds that divide and unite us.

There Where Atilla Passes… opens in theatres January 29, 2016.