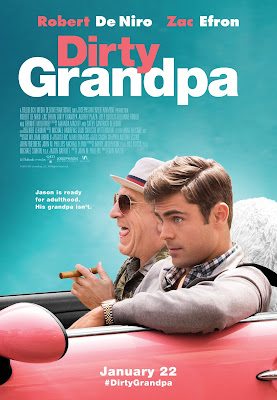 Pop some blue pills and get ready to party! Dirty Grandpa is hitting the town so you’d better be super excited! Zac Efron and Robert De Niro star in this raunchy comedy about a square named Jason and his grandpa named Dick. Sounds like fun for the whole family! Dirty Grandpa comes to theatres January 22nd from VVS Films, but lucky readers across Canada may win tickets to sneak peeks. Answer the trivia below for your chance to win tickets! Show us if #YouDontKnowDick!


Synopsis: Jason Kelly [Zac Efron] is one week away from marrying his boss’s uber-controlling daughter, putting him on the fast track for a partnership at the law firm. However, when the straight-laced Jason is tricked into driving his foul-mouthed grandfather, Dick [Robert De Niro], to Daytona for spring break, his pending nuptials are suddenly in jeopardy. Between riotous frat parties, bar fights, and an epic night of karaoke, Dick is on a quest to live his life to the fullest and bring Jason along for the ride. Ultimately, on the wildest journey of their lives, “dirty” Grandpa and his uptight grandson discover they can learn from one another and form the bond they never had.

Thanks to VVS Films, Cinemablographer has ten (10) double passes to give away to sneak peeks of Dirty Grandpa in Calgary, Edmonton, Montreal, Ottawa, Toronto, Vancouver, and Winnipeg. All you have to do to enter is answer the following question:

b) Borat
c) The Hangover
d) The Real Cancun