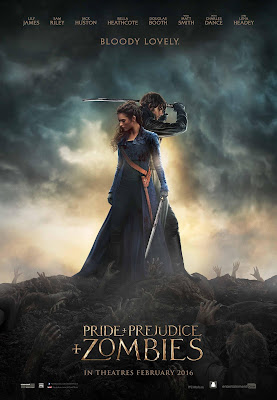 
Synopsis: A zombie outbreak has fallen upon the land in this reimagining of Jane Austen’s classic tale of the tangled relationships between lovers from different social classes in 19th century England. Feisty heroine Elizabeth Bennet (Lily James) is a master of martial arts and weaponry and the handsome Mr. Darcy (Sam Riley) is a fierce zombie killer, yet the epitome of upper class prejudice. As the zombie outbreak intensifies, they must swallow their pride and join forces on the blood-soaked battlefield in order to conquer the undead once and for all.

Thanks to eOne Films, Cinemablographer has ten (10) pairs of tickets to give away to sneak peeks of Pride and Prejudice and Zombies in Toronto (Scotiabank), Vancouver (Scotiabank Vancouver), Calgary (Chinook), Edmonton (Scotiabank Edmonton), Winnipeg (St. Vital), Ottawa (Gloucester), and Halifax (Scotiabank Halifax).

All you have to do is answer the following question:

Lily James stars as a butt-kicking Lizzy Bennet in Pride and Prejudice and Zombies. Which of the following actresses has also played the Jane Austen heroine?

*Contest open to residents of Canada only.
**Entries that do not include a city, or include multiple cities, will be discarded.
***Limit one email entry per person/household per contest. Multiple entries will be discarded and marked as spam.
****Limit one win per person per month.
Posted by Pat Mullen at 1/20/2016 08:15:00 PM