'The Daughter' is Unnervingly Powerful 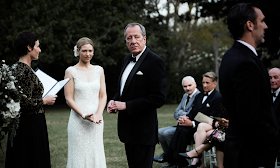 A hidden gem from last year’s festival circuit rises to the surface. The Daughter is a superbly acted drama that leaves a viewer guessing long after its final image cuts to black. In the vein of Ray Lawrence’s Lantana, this atmospheric tragedy is a tightly structured film about secrets and lies that devastate a family. This haunting feature directorial debut from Simon Stone, who previously appeared in Eye of the Storm and the terrific Jindabyne, is another example of the sharp and substantial filmmaking coming out of Australia these days. Stone’s tense chamber piece simmers with a minimalist’s ingenuity.

This Aussie flick gives a formidable cast some juicy roles, beginning with Geoffrey Rush as Henry, the wealthy patriarch and owner of a mill in a dying logging town. Henry is about to be married to Anna (Anna Torv), a much younger blonde, and his estranged son Christian (Paul Schneider) returns from America to put in an appearance at the wedding. Christian reconnects with his friend Oliver (Ewen Leslie) and spends more time with Oliver’s family, including his wife Charlotte (Miranda Otto, very strong, particularly in the film’s final act), daughter Hedvig (Odessa Young), and father Walter (Sam Neil), than he does with his own. It’s a small town, though, so word travels fast and Christian discovers a secret from the past that connects his family with Oliver’s family.

The families couldn’t be more different, but the film avoids clichés by creating each household as manors of their own inevitable collapse as they sit on foundations of lies. The cinematography by Andrew Commis shrewdly uses the fading natural light to convey the darkness that encroaches as Christian waffles with his choice to Henry’s secret. Beyond the strong themes of family ties, Stone finds a resonant metaphor in the image of a wounded duck for which Hedvig cares. The duck appears in the film’s introduction when Henry shoots it in a hunting expedition, but he only clips its wing. He can’t bring himself to kill it, even though it would yield some rich gamey meat, so he asks Water to do it instead. Walter is a better man than Henry is though, and he cares for the bird instead of killing it. As he nurtures the wounded animal, Hedvig takes it under her wing. (No pun intended.) She hopes that it will fly again, although her grandfather advises otherwise.

There’s something about the duck and Hedvig that resembles a flock. This girl encounters troubles of her own in The Daughter, some really awful ones, but she carries herself with fire and grit: she’s a fighter. Young steals the film from the strong ensemble with her heartbreaking performance as an innocent girl betrayed, disowned, and denied by her kin. The young actress devastates as she brings The Daughter to its abrupt, violent finale. Closure be damned.

The Daughter leaves the audience on edge as Christian percolates with the news that can damage his father, devastate Oliver, and destroy both families. His motivation to reveal the truth remains murky as he wants revenge on his father, but he hopes that airing the truth will free Oliver of a burden to which he is completely—and happily—ignorant. Schneider broods with Christian’s inner demons, which eerily simmer to the surface as The Daughter reaches its tragic climax. He’s a broken man, haggard and self-destructive. Rush, on the other hand, is very strong as Henry, for he plays a man losing his grasp on his family and legacy, but while trying to make amends for the past before it’s too late. As Henry loses his sight, both literally and figuratively, and his perfectly ordered world crumbles, Rush’s quietly composed man demands sympathy from the audience: he’s a victim of his own pride.

The Daughter adapts Henrik Ibsen’s play The Wild Duck, which Stone previously staged, and in good old Ibsen fashion, the film doesn’t end well for anyone.  The Daughter escapes the world of the stage despite its talkiness and fondness for interiors as editor Veronika Jenet (Strangerland) tautly entangles the lives of both families. Nimbly moving from Henry’s cavernous home to the wild woods where Hedvig roams with her boyfriend, The Daughter builds suspense and atmosphere as the multiple storylines brace for a collision. The film weaves back and forth between the two households and shifts audiences’ allegiance to characters cut by cut. The film affords multiple perspectives and never lingers on any character for too long, although Christian eventually emerges as the biggest beast of all and Hedvig as his tragic victim. Christian, a drunk straddling the breakdown of his own marriage, hungrily spies opportunities to punish those around him, especially Anna and Charlotte, as retribution for Henry’s failures as a husband and father. Like the shotgun that appears throughout the film, The Daughter fires a sharp shot that stings and reverberates. It’s unnervingly powerful.

The Daughter opens in limited release this spring.