'The Saver' Has Good Intentions 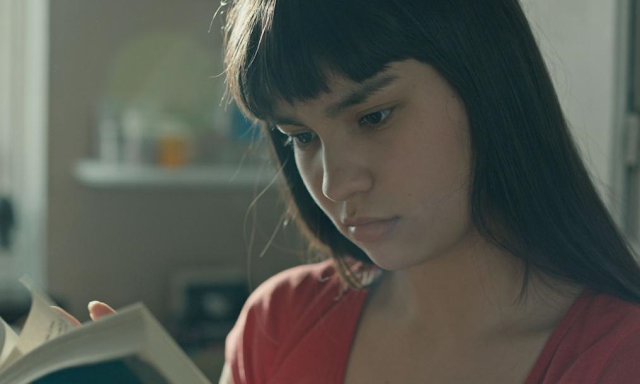 Canadian film gets a notable step forward in the representation of Aboriginals onscreen with The Saver. The film, adapted by a YA novel by Edeet Ravel, tells the story of a young girl named Fern (played by Imajyn Cardinal, daughter of actress Michelle Thrush of Blackstone and Jimmy P.), but The Saver could easily be the story of any teenager in Canada. This new offering from writer/director Wiebke von Carolsfeld (Marion Bridge) and the producers of Canuck landmark Rhymes for Young Ghouls offers a story that is both specific and universal as Fern perseveres in the face of adversity. With the aid of a few allies, a high-spirited uncle, and some cranky white people, The Saver situates Fern’s story within an inclusive and diverse Montreal.


Fern, at sixteen-years-old, grows up quickly when her mother dies suddenly one day while Fern is out cleaning houses. Rather than wallow in helplessness and self-pity, Fern refuses to feel like a victim. She quits school and evades Youth Services by skipping out on her mother’s lease in their low-income housing, and she cleverly wrangles a job as a live-in superintendent for a low-end apartment. She lands the gig by lying about her age and appealing to the emotions of the landlord (Paul Spence), who is about to lose his own father.

Fern takes an odd vow of poverty as she begins collecting junk from the apartment garbage dump and she scrapes together some modest savings by adding a job in a kitchen thanks to Hamidou, an African chef (Hamidou Savadago), who gives her free food in addition to her pay. She’s a shrewd girl and a born entrepreneur who thrives on street smarts, although she also lies to Hamidou about her age and name. (She goes under the alias ‘Melanie’ for her jobs.) Hamidou adds a noteworthy element to the diverse cast as Savadago gives a likable performance as the old school chef who teaches Fern some valuable lessons as he riffs to her in French while she responds in English. It takes a while for Fern to get the lingo down, but she and Hamidou eventually find harmony.

Fern’s work in the apartment building, however, isn’t as fortuitous. Simply put, she’s a terrible janitor and caretaker. Fern finds a foe in one of her tenants, Mrs. Coleville (Pascale Bussières, Ville-Marie), even though there’s nothing especially sinister about Mrs. Coleville’s requests for maintenance. She could ask more politely, but inquiries about broken faucets, jammed windows, and leaky roofs are all part of the parcel when it comes to maintaining an apartment. The film puts Fern in a lethargic pattern of altercations with Mrs. Colville in between her thrifty endeavours.

The Saver often struggles to make Fern a sympathetic character despite the complexity of her situation. As a confused and orphaned teen, Fern desperately needs guidance; however, the elements in Fern’s life that The Saver often pits as foes—her tenants, her education, and Youth Services—are also parts of the larger social system in which she finds herself and are tools for the independence she seeks. Many of her modes for “saving” actually exploit people who try to help her, for Fern literally steals food from the refrigerators and shelves of her clients (some of whom are quite concerned for her well-being) and by lying to her employers.

The film doesn’t find a balance for the idealism and inspiration it seeks in Fern’s desire to salvage junk, which really just amounts to neurotic hoarding and materialism. Some of Fern’s objects carry emotional baggage, but The Saver doesn’t unload Fern’s fixation on “things” as she reconciles the loss of her mother with her fight for independence. Cardinal does her best to carry the film in her first leading role, but the part often extends beyond her dramatic range and the film sometimes sags when von Carolsfeld’s intimate realism puts much of the weight of the film on the lead performance.

Similarly, von Carolsfeld misses an opportunity to unpack Fern’s place within the city’s larger multicultural make-up. The Saver does an excellent job in increasing onscreen representation by opting not to make Fern’s identity as an Aboriginal a point of inquiry. A few nice subtleties in Fern’s interactions with her uncle Jack (an agreeable Brandon Oakes from Rhymes for Young Ghouls) hint at a difficult childhood for Fern’s mother (and a lone bottle of Drambuie implies a battle with addiction), but the film ultimately treats the character as it would with any other actress in the role. However, Fern finds herself lost amidst a sea of one-dimensional characters and evil over-privileged white people (a mix of drug addicts, bitches, and rich people with houses), who become foils by making maintenance requests, offering help when Fern’s mother dies, or expressing interest in Fern’s well-being. Fern falls into a testy relationship with an angry, pervy plumber (played by Gabrielle’s Alexandre Landry), who is rightfully contemptible, but The Saver stumbles on too many stock characters in its effort to make Fern endearing. The film is so diverse that it ultimately disappoints by forgetting to craft its characters with equal complexity. The effort, while imperfect, is appreciated even if the film can't match its good intentions.

The Saver is currently hitting the festival circuit.