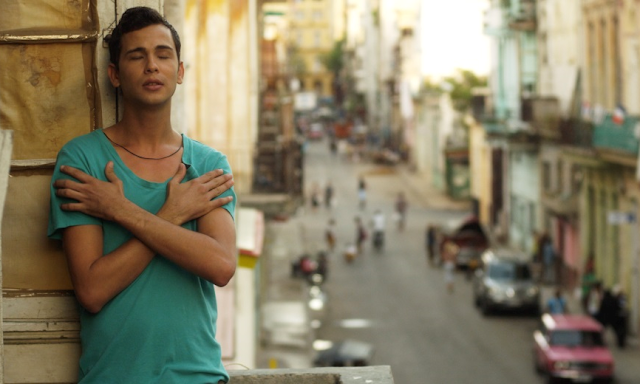 Irish film finds a Spanish flavour in the remarkable coming-of-age film Viva. This Cuban-shot Spanish-language production, which credits Benicio Del Toro as an Executive Producer, is Ireland’s bid in the Oscar race for Best Foreign Language Film and one of only nine films still in contention after December’s shortlist announcement. It might be a dark horse against frontrunner Son of Saul and festival favourite Mustang, but Viva is another great example for how the foreign film Oscar race spotlights world cinema during the gong show of award season. Viva brings a story of a young man named Jesus (Héctor Medina) who finds his independence as a drag performer named Viva. This moving film puts a new spin on a familiar narrative of fathers and sons as Jesus befriends and forgives his long lost father, Angel (Jorge Perugorría). As Viva comes into her own under Angel’s discomfort with his son’s sexuality, Viva adds to the canon of notable queer films breaking through the indie scene of late.


Viva is immediately accessible thanks to the strength of its characters and setting. Viva offers something for audiences following last summer’s unlikely crowd-pleaser Tangerine. Viva hits the streets of Cuba with the same eye for parts of the city that don’t appear in postcards, but the scenery and cinematography of Viva are strikingly beautiful for giving the back streets and hidden corners of the city life and spark.

The film largely plays out in two worlds in between Jesus’s wanderings through the streets of Havana: Jesus’s dingy apartment, which he frequently lends to his friend Cecila (Laura Alamán) so she can sleep with men without drawing scrutiny from her family, and Jesus’s workplace, which is a drag cabaret where he tends to the wig collection of a performer named Mama (Luis Alberto García). Mama offers the lone parental figure to young Jesus as the boy watches the performers from the wings, and she keeps him on the level against taking to the streets to earn extra money the old-fashioned way. When Jesus decides that he wants to take the stage and perform in drag to earn a few dollars, though, Mama reluctantly agrees to let Jesus strut his stuff.

The first performance goes poorly as Jesus transforms into Viva. The lithe, androgynous Medina actually looks more masculine when Jesus makes his first appearance as Viva, as Viva’s awkward gait, broader shoulders, and un-ladylike bulge highlight amateur-hour theatrics to the crowd and to Viva’s drag queen colleagues. Viva’s stiff performance also lacks the theatricality and camp of the other queens’ numbers, as Viva mouths the words to the song, but doesn’t bring anything else to the runway to make the customers feel happy and gay.

Come around a second time, however, and Viva has a bit more bitch in her step and a far better balance of masculine/feminine. (A proper tuck helps thanks to the girls backstage.) All goes well until Viva works her stuff on a man in the crowd who eyes her far more fiercely than the other men do. Rather than respond to her gentle caress with affection, the man punches Viva in the face. “I’m your father!” the drunk exclaims in disgust.

Viva then takes an unexpected turn as Angel, on leave from prison, returns to Jesus’s life after eighteen years. Jesus lets his father into his home with few questions: he looks forward, and not at the past. Angel, a boxer-turned-drunk, is a different story as he lives in the shadow of his glory days with booze-fuelled machismo. It suffices to say that Angel is not the best roommate for a petite young man exploring his feminine side.

A custody battle of sorts ensues as Angel refuses to let Jesus perform in drag and Mama offers a safe haven for Jesus in the cabaret. But the real reason for Angel’s return (which is somewhat predictable) lets family ties pull Jesus towards his biological father. In an ironic twist, this move also puts Jesus into the streets, supporting himself through prostitution to provide for his father.

As Viva puts Jesus and Angel in a series of hospital rooms, motel rooms, back alleys, and nightclub runways, the film offers a refreshingly frank and sentimental tale of forgiveness and self-acceptance. The more Angel breaks down the wall that prevents him from loving his son as he truly is, the more Jesus finds his voice as Viva. Medina gives a strong turn as Jesus and the actor boldly puts himself display his Jesus’s androgynous shapeshifting. The actor lets Viva’s drag performances offer turning points for the character as Viva’s final performance captivates the audience with a mix of sex appeal, confidence, and raw emotion that are absent from her initial numbers.

Perugorría and García are highlights in a fun and full-bodied ensemble as Jesus’s two parental figures. The former is a broken shell battling old ghosts, while the latter is a fiery diva of sass and compassion. Director Paddy Breathnach and writer Mark O’Halloran let Viva sing through the strength of its characters, while the openness and energy of the actors bring the characters to life. The people of Viva could easily populate an Almodóvar film with their bubbly humour, campy appeal, and hungry lust for life, yet Breathnach’s even-handed direction pulls Jesus and company out of the brightly-lit palette of the Almodóvar world and thrusts them into the grit of poverty and life on the streets. The film is raw, vivid, and wonderfully alive.

Viva screens later this month at Sundance and it opens in theatres in February.