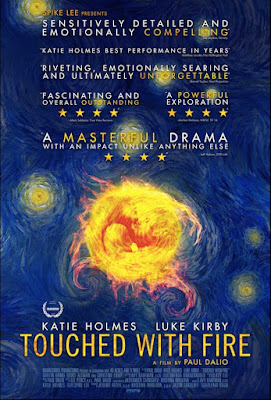 Katie Holmes and Canadian actor Luke Kirby bring an inspiring story to the screen in Touched with Fire. A hit at last year’s SXSW film festival, Touched with Fire comes to Canadian theatres and VOD on Friday, February 19 from Pacific Northwest Pictures, and lucky readers can win run of engagement passes to see the film on the big screen! Answer the trivia below for your chance to win passes!


Synopsis: Touched with Fire is the story of Carla (Holmes) and Marco (Kirby), both bipolar poets whose art is fueled by their emotional extremes.  When they go off their meds, they end up in the same psychiatric hospital. The chemistry between them is instant – but it also stirs up their emotions and intensifies their conditions. Despite doctors' and parents' attempts to separate them, they pursue their beautiful but destructive romance which spirals into passion too extreme for their lives to sustain, until they have to choose between sanity and love.

Thanks to Pacific Northwest Pictures, Cinemablographer has three (3) run of engagement passes to give away to see Touched with Fire at Cineplex cinemas across Canada! All you have to do to enter is answer the following question:

Which acclaimed filmmaker is an executive producer of Touched with Fire?

Touched With Fire trailer from Pacific Northwest Pictures on Vimeo.

*Entries that do not include a mailing address may be discarded.
**Limit one email entry per person/household per contest. Multiple entries will be discarded and marked as spam.
***Limit one win per person per month.
Posted by Pat Mullen at 2/14/2016 04:00:00 PM