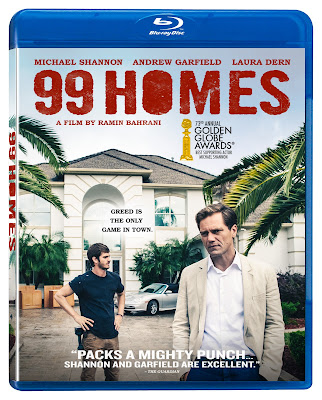 Catch one of 2015’s best performances when Michael Shannon’s intense turn in 99 Homes comes to home vid. After earning Best Supporting Actor nominations from the Golden Globes, Screen Actors Guild, and Critics Choice Awards, plus a win from the LA Film Critics, readers have another chance to catch this powerhouse performance. (With great work by co-stars Andrew Garfield and Laura Dern as the cherry on top.) 99 Homes comes to Blu-ray, DVD, and Digital on Tuesday, February 9 from VVS Films, and lucky readers have a chance to win a copy of the film on Blu-ray. Answer the trivia below for your chance to win 99 Homes!


Synopsis: A man (Andrew Garfield) struggles to get back his family home that they were evicted from by working for the greedy real estate broker (Michael Shannon) who's the source of his frustration.

Thanks to VVS Films, Cinemablographer has three (3) Blu-rays of 99 Homes to give away! All you have to do to enter is answer the following question:

For what film did Michael Shannon previously earn an Oscar nomination?

a) Take Shelter
b) Revolutionary Road
c) My Son, My Son, What Have Ye Done?
d) Bad Lieutenant: Port of Call – New Orleans

*Contest open to residents of Canada only.
*Entries that do not include an address may be discarded.
**Limit one email entry per person/household per contest. Multiple entries will be discarded and marked as spam.
***Limit one win per person per month.
Posted by Pat Mullen at 2/04/2016 11:34:00 AM