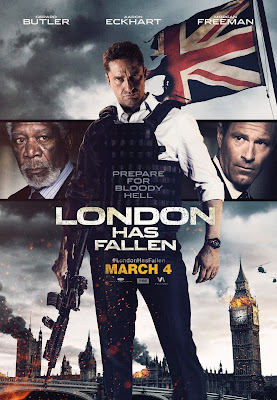 Big Ben is about to topple like a pile of Jenga blocks in London Has Fallen! London Has Fallen, the sequel to the 2013 hit Olympus Has Fallen, brings Gerard Butler back in action to protect international leaders from terror. London Has Fallen opens in theatres March 4th from VVS Films, but readers across Canada may attend a sneak peek to see the film before it hits theatres. Answer the trivia below for your chance to win tickets to London Has Fallen!


Synopsis: The sequel to the worldwide smash hit Olympus Has Fallen begins in London, where the British Prime Minister has passed away under mysterious circumstances. His funeral is a must-attend event for leaders of the western world. But what starts out as the most protected event on earth turns into a deadly plot to kill the world's most powerful leaders, devastate every known landmark in the British capital, and unleash a terrifying vision of the future. Only three people have any hope of stopping it: the President of the United States, his formidable secret service head (Gerard Butler), and an English MI-6 agent who rightly trusts no one.

Thanks to VVS Films, Cinemablographer has ten (10) double passes to give away for sneak peeks of London Has Fallen at the following screenings on March 2:

Which actor plays the President of the United States in London Has Fallen?

London Has Fallen opens in theatres March 4 from VVS Films.

*Entries that do not include a city may be discarded.
**Limit one email entry per person/household per contest. Multiple entries will be discarded and marked as spam.
***Limit one win per person per month.
Posted by Pat Mullen at 2/12/2016 12:26:00 PM