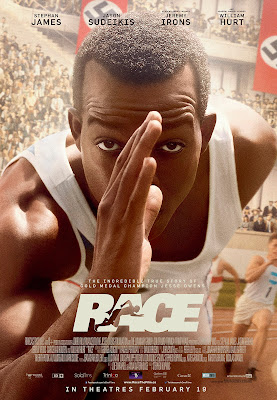 The race continues! Stephan James (Home Again) stars as in Race, the incredible true story of runner Jesse Owens who defied Hitler and became an icon by winning four gold medals at the 1936 Olympics. Race opens in theatres February 19 from eOne Films, but lucky readers across Canada may win tickets to sneak peeks! Answer the trivia below to win!

Synopsis: Based on the incredible true story of Jesse Owens, the legendary athletic superstar whose quest to become the greatest track and field athlete in history thrusts him onto the world stage of the 1936 Olympics, where he faces off against Adolf Hitler’s vision of Aryan supremacy. “Race” is an enthralling film about courage, determination, tolerance, and friendship, and an inspiring drama about one man’s fight to become an Olympic legend.

Thanks to eOne Films, Cinemablographer has ten (10) pairs of tickets to give away to sneak peeks of Race at the following locations: