Your Money or Your Wife 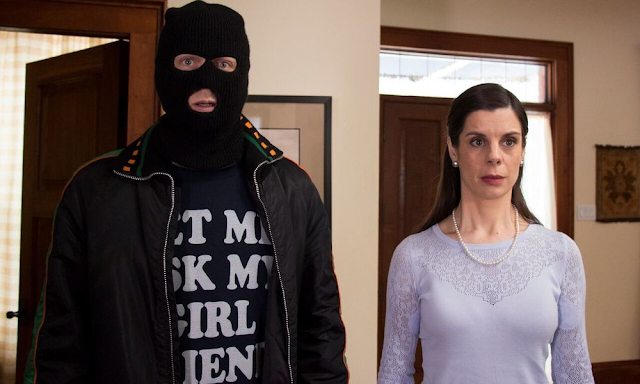 Lionel: “We’re like Canadian gentlemen robbers. Have you ever seen the movie Foolproof?”
Annie: “I Love that movie.”
Mike: “That movie’s crap. Canadian movies are garbage.”


The above exchange happens near the end of the Nova Scotian crime comedy Your Money and Your Wife. Lionel (Craig Brown) and Annie (Meredith MacNeill) engage in the same self-referential banter that characterizes their first date. Mike (Mark A. Owen) crashes the party with his bad vibes and, well, a gun. Mike kills the mood by brandishing his pistol in the air and dumping on a hugely expensive Ryan Reynolds dud, but in good-old, self-effacing Canadian film fashion, Your Money or Your Wife sides with this widely derided heist flick in solidarity and gives Mike his comeuppance as Lionel and Annie find love. It might not have the same scale of budget that Foolproof does, but Your Money or Your Wife might be, like, the most Canadian romantic heist comedy ever made.

Your Money or Your Wife offers an affable micro-budget caper as Lionel becomes the unwitting third man in a home-invasion-cum-hostage-situation. His girlfriend left him for another man the night before, so he went on a bender and escaped the frigid Maritime winter be sneaking into an open garage, which, naturally, is owned by two clowns named Warren and Elsie (Brian McWarren and Annie Valentina), who await a stranger to pop by and help them with a robbery. Mistaken identity be damned, Lionel is simply too polite and sheepish to stand up to a pair of inept wannabe robbers. (It’s easy to see why his girlfriend dumped him.) He therefore goes out into the Nova Scotian suburbs with the gun-toting doofuses, who give each other the pseudonyms of Carlos and Esmerelda, while he coincidentally receives the name Lionel as a cover.

A Murphy’s Law case of drolly B-grade nincompoopery ensues as “Carlos” and “Esmerelda” let Lionel lead the mission, which is to enter a home and force a homemaker, Annie, to lead them to a stash of cash her husband embezzled from work. The robbers find themselves a bit bamboozled, though, when they enter the house and Annie, a smart-ass, has the upper hand on their collective idiocy. The bandits run around the empty house, search cabinets, and try some tricks from Home Invasion for Dummies, but nothing works except for the inevitable fact that Annie steals Lionel’s heart.

Brown and MacNeill are lots of fun together as Lionel and Annie become allies and work together to thwart the robbers. Brown (Ben’s at Home) brings an everyman charm to his performance as Lionel assumes the role of a haplessly endearing shmuck who just can’t catch a break. There’s a bit of Brent Butt and Don McKellar to this likable loser. MacNeill (Big News from Grand Rock), on the other hand, brings razor-sharp deadpan humour to her performance. Annie’s sarcasm magnifies the idiocy of Warren and Elsie, which McWarren and Valentina play with goofy measure.

The pair bands together and finds mutual attraction gabbing about their disappointing lives and the stupidity of Lionel’s cohorts. Writer/director Ian Macleod injects the film with ample Canadiana as Lionel and company reference the CBC, cheap movies, and frigid winter within the quick and witty banter. The film is very much aware of its own cheapness, which the big empty house, a symbol of Annie’s own marriage, somewhat amplifies.

The funny cast carries the film with playful repartee as Macleod lets the script and players up the stakes. Your Money or Your Wife isn’t much of a heist film or caper, but it doesn’t try to be, either, as the botched robbery humorously invites a series of situational gags that lead to Lionel find true love. (Telefilm Canada can only afford so many wads of fake money each year, anyways.) As Lionel and Annie brave the case of mistaken identity and endure the robbers, a pair of Jehovah’s Witnesses, and, eventually, Annie’s husband, Your Money or Your Wife builds a sweet rom-com in which love is the ultimate score. Making a Canadian heist movie isn’t foolproof, but mild-mannered comedies like this one score ample laughs with the right set-up.

Your Money or Your Wife is currently doing the festival thing.