'We of the Craft Are Crazy' 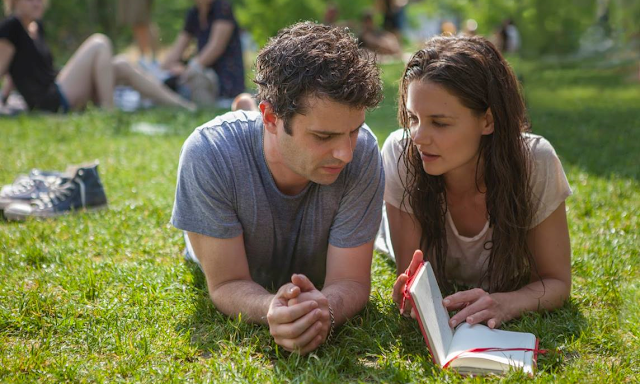 “That’s what I call illuminating,” says Marco (Canadian actor Luke Kirby) as he displays a portrait of a bipolar brain to Carla (Katie Holmes), his partner-in-crime at the hospital. Marco and Carla are both bipolar and this picture of a brain that shares their illness pops off the page with its vibrant colours: blue, pink, violet, and red. The picture, an image from a ho-hum medical book, speaks directly to the experience that Marco and Carla seek to validate while escaping the treatment put open them by the doctors and orderlies at the hospital. Marco, a rapper, and Carla, a poet, both have strong artistic talents that hit their creative heights with the manic strokes of their bipolar roller coasters. Art and madness is a long-reigning love affair, but Touched with Fire shows that the connection runs much deeper and is far more politically correct.


Touched with Fire draws its inspiration from the 1996 book of the same name by Kay Redfield Jamison, which explores the legacy of great artists and writers who also happened to be bipolar. This list is long with Virginia Woolf, Ernest Hemingway, and William Faulkner on the list. The artist with whom Carla and Marco share the strongest affinity, however, is not a writer but a painter. It’s Vincent Van Gogh, the man behind Starry Night, who invigorates the two with his swathes of colour that realise a twinkling night sky with far more dazzle than a clinically sane person could ever see.

Carla and Marco aren’t the best influence on each other, though, just as how things didn’t bode well for VVG when a knife met his ear. The two drive each other wild and they fuel each other’s manic state. Love burns like fire, and the pair nevertheless connects despite the doctor’s orders and the protests of their parents. They live free and a little wild, off their meds and in the creative zones. They tell each other that they feel better, but their behavior—wild, shrill, and erratic—tells a different story.

“We of the craft are all crazy,” says Marco in one of his most intensely panic moments. He and Carla convince one another that they are both too good for this planet and are therefore otherworldly beings. Touched with Fire pushes its patients to extremes as they escape the boredom of Earth and fly free in rooms that sparkle with the palette and swirls of Starry Night. The comedown, however, hits them both hard and it strikes the families with even greater might.

Touched with Fire gives a sensitive and compassionate study of mental illness. Writer/director Paul Dalio, drawing on his own experience as a bipolar artist, offers an honest and open character study of the highs and lows people experience when they live with a condition such as bipolar disorder. Touched with Fire sometimes feels a little forced, and a cameo by Jamison is a little too on-the-nose and clinical, but it’s ultimately an empathetic drama.

Holmes and Kirby give committed performances that are raw and focused. Determined to convince members of the audience that the signs and symptoms they see are real, they push themselves to the extremes of their characters’ illnesses. The physical intensity of their performances impresses, as does the range, nuance, and authenticity. Much like Mark Ruffalo does in last summer’s roller coaster ride Infinitely Polar Bear, the actors convey to the audience the complexity of their characters’ conditions.

While the film doesn’t quite hit the same emotional highs as Infinitely Polar Bear does, nor does it find the range of mood swings that the Bear achieves with its mix of comedy and drama, Touched with Fire gives a realistic portrait of living with mental illness, as well as caring for a loved one who experiences such a condition. The film opts for a sobering approach as the story shows the impact that manic/depressive state have on the families of bipolar persons. The film invites Carla and Marco’s parents to play the referees in Carla and Marco’s tug of war between their manic and depressive states and it shows the difficulty in watching a loved one suffer as he or she struggles to feel real within their lofty state. Christine Lahti is heartbreakingly good as the pivotal role of Carla’s mother, Sara, who gives the film a jolt of uncontrived emotion. She’s a beacon of hope and sanity in a tough but rewarding film.

Touched with Fire opens in limited release on Feb. 19.

Touched With Fire trailer from Pacific Northwest Pictures on Vimeo.