Capsule Reviews: 'The Passion of Augustine', 'Triple 9', 'Eddie the Eagle'

Playing catch-up with some capsules!


Canadian filmmaker Léa Pool (Pink Ribbons, Inc.) pulls a sister act with the singing nun pic The Passion of Augustine. This box office smash in Quebec and Canadian Screen Award nominee for Céline Bonnier’s quietly stirring performance is a crowd-pleasing, feel good period drama. The film’s struggle to find life outside of Quebecois theatres and the international film festival circuit somewhat fairly betrays the fact that The Passion of Augustine is hard to appreciate fully for viewers who are not well-versed with the province’s history of The Quiet Revolution. However, even if The Passion of Augustine doesn’t resonate entirely, one still enjoys the unabashedly inspiring drama about a nun who strives to save her music school when the winds of change blow through La Belle Province and the Catholic Church. Bonnier gives a performance of immaculate restraint as Mère Augustine, bringing the film to life with her composure and spirit. The film is a warm character study in survival and adaptation as Augustine wisely sees the potential that lives in the shifting times, while her peers cling to tradition and struggle to thrive in the face of change. A strong supporting cast buoys the film, especially Diane Lavallée as a fellow nun who fears revolution, while Lysandre Ménard is very effective as Augustine’s rambunctious niece Alice, who embodies hope for the future with her spirit and classical piano skills. Augustine gets a respectable ‘Amen!’

The Passion of Augustine is available on home video.

Triple 9
(USA, 115 min.)
Dir. John Hillcoat, Writ. Matt Cook
Starring: Chiwetel Ejiofor, Casey Affleck, Anthony Mackie, Woody Harrelson, Aaron Paul, Kate Winslet
An impressive cast finds itself stranded in John Hillcoat’s sprawling and messy crime drama Triple 9. An incomprehensible screenplay by Matt Cook clashes with incoherent editing as multiple storylines spill together in a senseless web of guns, drugs, and thugs. There is simply nobody to root for as Chiwetel Ejiofor leads a pack of nefarious characters through a botched bank heist and Triple 9 doesn’t give much reason to care as corpses pile up in a body count that rivals Hamlet’s bloodshed as an unruly Russian mob boss, played by Kate Winslet in a hoot of a performance, wins at any cost. There’s a lot to admire in Triple 9, including some of the performances and set pieces, but it never makes sense as it cuts from one thread to another. The film is at its most disjointed when a lengthy chase sequence interrupts the action and feels completely and totally random even after most of the characters try to explain why the bloodbath went down. Winslet, on the other hand, never ceases to be a novelty with her Elaine Benes hairdo and inconsistently feisty accent. In Russia, we get paycheck!

Triple 9 is currently playing in theatres. 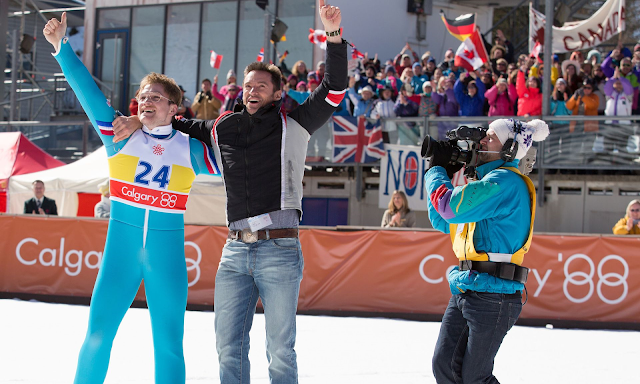 Fans of Cool Runnings will cheer for the underdog story of Eddie the Eagle! This fun and energetic true story of Eddie “The Eagle” Edwards captures the passion of pursuing a dream as Eddie (Taron Egerton, Kingsman) fulfills his desire to compete in the Olympics. Eddie wants to go to the games more than anything, so he risks his life to become Britain’s one-man ski-jumping team and, despite all odds, squeaks by the requirements after a few tumbles and crash landings. Egerton is a likably goofy lead as Eddie’s dorky enthusiasm gives Eddie the Eagle the right heart and spunk to win over the crankiest of moviegoers. Hugh Jackman adds a fun supporting turn as a has-been jumper and Eddie’s mentor who teaches Eddie the secrets of the slopes with a few surly pointers. Director Dexter Fletcher (Sunshine on Leath) brings the right spirit and energy to make this rousing underdog tale utterly winning. The ski jumps themselves are some breathtaking feats and the crash landings will have viewers squirming in their seats. Like the jumper himself, Eddie never ceases to charm with its infectiously genuine spirit.

Eddie the Eagle is now playing in theatres.