Batman and Superman Make Nothing But BS 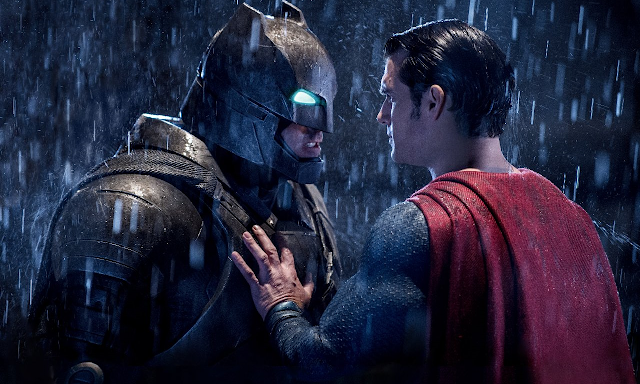 The title Batman v. Superman implies a winner, but the reality is that everybody loses with this film. The much anticipated showdown between the Caped Crusader and the Man of Steel comes three Batman movies and two Superman reboots later in the new era of comic book movies, and this $250 million dollar opener for yet another goddam superhero franchise leaves Ben Affleck and Henry Cavill holding the hot potato long after everyone else has passed it on. Put Batman and Superman together and all this film yields is a huge steaming pile of BS.


There’s really nothing to admire or enjoy in Batman v. Superman: Dawn of Justice as director Zack Snyder presents a movie that can barely justify its own existence. BS is essentially a two-and-a-half hour preview for the upcoming Justice League movies, but the problem here is that trailers normally run for two-and-a-half minutes. BS adds a lot of filler while bringing together two characters whose backstories have been told in numerous films. This actioner doesn’t spend much time on Superman’s origins, but it gives audiences the story of how Batman’s parents died—a spoiler alert if one didn’t see Mr. and Mrs. Wayne get whacked outside the movie theatre in Batman or Batman Begins. A very awkward first act introduces Superman (Cavill) as he wreaks havoc on Metropolis, which is like the New Jersey to Gotham’s New York, and the buildings of Wayne Enterprises crumble as Batman, né Bruce Wayne (Ben Affleck) looks on. From the eyes of one brooding caped man to another, frenemies are born.

Batman v. Superman riles up both superheroes and gets them angry over the existence of the other as media hype creates puff pieces and bad PR alike for both men. A logical viewer might wonder why both crime fighters fail to recognise the goodness of the other as the press demonise them both for their actions. They’re the same men fighting the same war. Batman v. Superman thus builds to a showdown that inherently doesn’t make sense. As one superhero tries to make himself appear bigger than the other one, the silliness of this charade of measuring and mansplaining belies the juvenile drive at the heart of all comic book movies. There are so many comic book and superhero movies these days that the loud, silly bombast of Batman v. Superman leaves one thinking that enough is enough.

Cynicism and jadedness aside, Batman v. Superman is simply sloppy, messy, and shoddy filmmaking. It’s an incoherent rabble of dumb dream sequences as Batman wades into Zack Snyder territory mixed with storylines with Lois Lane (Amy Adams) chasing a story to clear Clark Kent’s name and an eager Senator (Holly Hunter) making a case against Superman, but being foiled by Lex Luther (Jesse Eisenberg) in the process. Adams and Hunter are highlights of the film, but Eisenberg is atrociously unhinged and shrill as the villain. He chews the scenery with unbearable glee and smugness, but there’s barely any reason for Lex Luther to be in the film aside from acting as a go-between to coax Superman and Batman towards their inevitable confrontation. Throw in a half-baked subplot with Diana Prince (Gal Godot) and Bruce Wayne gets to seem like a boozier, richer Nick Dunne as he tries his playboy ways on Wonder Woman. If Amazing Amy were the villain, this flick might give audiences a little more Ben for their buck.

When the film FINALLY ties all the threads together and lets Batman and Superman do the versus thing, the fight is disappointingly anticlimactic. It’s mostly because it comes nearly two-hours into the movie and is like an even-handed call-and-response to leave fanboys of either caped champion happy, but the showdown mostly fails to satisfy because one realises that this movie is just an overdrawn tease for another blockbuster. They aren’t going to give audiences a showdown and they never were. Joining forces against Lex Luther and some incomprehensible Hulk-like thing, Batman and Superman become kryptonite for the audience as Snyder unleashes a flurry of overblown CGI for a grand finale of fake and flashy fury. Say what you will about the overwrought Christopher Nolan movies, but they don’t play like mindless video games. The final act is a shame since Batman v. Superman actually looks incredible, especially in 70 mm presentations.

The ultimate letdown of Batman v. Superman, though, is that the film reveals how both superheroes simply don’t make for interesting characters. Compare Batman to the inhuman powers of Superman and he simply resembles a detective with fancy toys and a great budget. Superman, by contrast, renders himself dull with his unflappable nobility and near invincibility. There isn’t much reason to root for either one.

Affleck, however, makes for a fun and cocky Batman while Godot holds some promise for the Wonder Woman films with her spirited screen presence. Adams gives the film some humanity, while new characters like The Flash (Ezra Miller) hint at things that audiences haven’t seen before in the endlessly derivative world of superhero movies. Batman v. Superman: Dawn of Justice isn’t the worst entry that either franchise has seen, but both Batman and Superman have done better justice in stronger films.