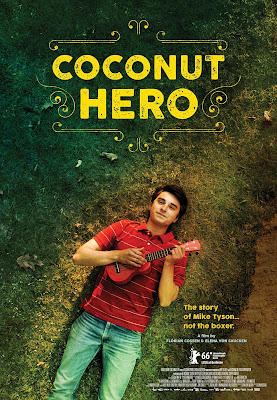 Now playing in theatres, Coconut Hero is a quirky and endearing Canadian co-pro. (Read the Cinemablographer review here.) The film comes to home video on April 1 from Search Engine Films and lucking readers have a chance to win a free download. Answer the trivia below for your chance to win!


Synopsis: Coconut Hero tells the story of Mike Tyson.  (Not the boxer, a different one.) Abandoned by his father at an early age and the butt of abuse at his school in a sleepy northern Ontario logging town, 16 year-old Mike Tyson (a name that's just one of his many problems) is determined to leave his messed-up life permanently. However, his suicide attempts have met with utter failure. When Mike learns he's got a fatal brain tumour requiring immediate surgery, he considers it an answer to his prayers. Keeping his condition a secret from everyone – in particular his overbearing mother, Cynthia – Mike waits for nature to run its course.  However, when he is befriended by newcomer Miranda, the first person to truly understand him, slowly but surely Mike develops an entirely new wish…

Thanks to our friends at Search Engine Films, Cinemablographer has three (3) digital downloads of Coconut Hero to give away. All you have to do to enter is answer the following question:

Send your answer and full name to contests@cinemablographer.com with the subject ‘Coconut Hero’.

Coconut Hero is now playing in limited release. It opens in Ottawa at The ByTowne on Friday, March 25, and lands on digital April 1 from Search Engine Films.

**Limit one email entry per person/household per contest. Multiple entries will be discarded and marked as spam.
***Limit one win per person per month.
Posted by Pat Mullen at 3/24/2016 04:50:00 PM