Gere stars as an absolute trainwreck of a man named Franny, a wealthy architect and benefactor who throws money around to fill the void in his life. Franny’s philanthropic zaniness appears in full force when his love for weed and his absolute disregard for responsibility send his two best friends, Bobby (Dylan Baker) and Mia (Cheryl Hines), through their windshield. The accident leaves brutal physical and emotional scars on Franny, and it gives him a mild sense of accountability as he comes to support his friends’ orphaned daughter Olivia (Dakota Fanning, also quite good here). The car crash also marks Franny with a crippling addiction to painkillers, a convenient crutch that he uses to his advantage. He’s a man who gets what he wants.

Franny’s reckless sense of entitlement comes full circle when Olivia, now pregnant, re-enters his life with her new husband Luke (Theo James). Patron that he is, Franny pulls some strings and throws some money around, netting Luke a job in the process and a home for Olivia and the baby, which leaves her more uneasy than gratified. She has right to worry, though, because her return only brings back the ghosts whirling about in Franny’s memory bank. He can’t handle the pressure of things left unsaid and he spirals out of control like a reckless junkie looking for a fix.

As Franny’s composure shatters, Gere is simply phenomenal playing against type as a man whose potential for greatness relapses into a sweaty frenzy that thirsts for instant gratification. Paranoid, edgy, and utterly volatile, Franny holds multiple personas within the carefully mixed cocktail that shakes beneath his surface. Gere shows the audience that this charismatic and eloquent man has the potential for greatness, but he’s ultimately undone by his own emptiness and fears of intimacy as he mixes drugs in search of the right dosage to fill the void in his soul. Gere challenges the audience to sympathise with this man whose complacency and misplaced privilege ultimately provide a complex and fascinating character who holds the film together by conveying how addictions and guilt eat at the soul.

James gives a fine supporting turn as Luke, who wrestles with his own responsibilities and vices as Franny takes him under his wing and seduces him with the intoxicating temptations of his lavish behaviour. The Benefactor, however, doesn’t really know what to do with this testy relationship between the unstable Franny and the young recipients of his charity and misguided goodwill, as it waffles between the world of a thriller and realm of an art piece in a mix of underdeveloped scenes that struggle to fit together. Renzi’s film might benefit from a little more meat as the fast-paced drama could fill itself out in some moments to develop the tensions brewing between Franny and his beneficiaries, and ultimately give Gere even more heft to his great performance. As a character study and actor’s showpiece, however, The Benefactor is Gere at his deepest and darkest. 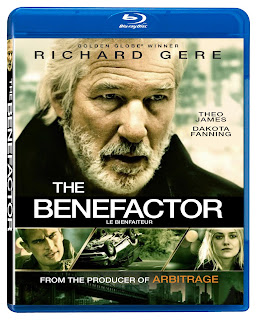 The disc: The 1080p HD transfer is dark and moody, and showcases Renzi’s promising visual style in the atmospheric cinematography by Joe Anderson, while the 5.1 Dolby True HD sound gives a nice gravelly layer to Franny’s voice.

The features: This bare bones disc features just the movie and a range of options for languages and subtitles, but finding a performance this good on a direct to video title is a bonus in its own right.

The Benefactor comes to Blu-ray, DVD, and digital on April 26 from VVS Films.