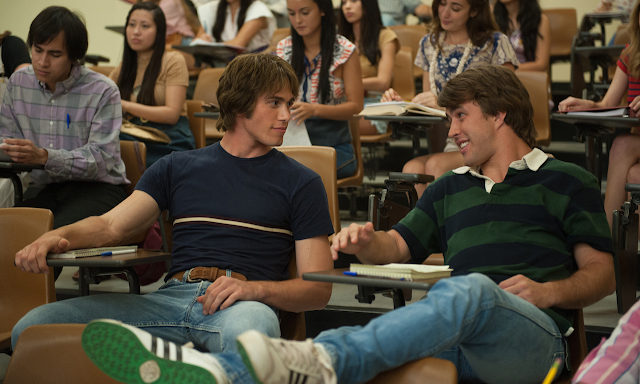 
Everybody Wants Some doesn’t explore much new terrain for Linklater, but it’s easy to see the filmmaker’s growth between slacker comedies. The way Linklater’s camera hugs the floor and glides like a snake around phone lines and water hoses, for example, shows how he’s refined his style and his use of cinematic time and space to take the scripts up a level. Rather than troll the camera along the cheeks of a co-ed (re: Animal House), the film gives an immersive view into a testosterone-laden jungle that’s humid with hormones and cheap beer.

Ditto the turn-of-the-decade atmosphere as the boys of the baseball team lounge express themselves with hand-me-downs from their older brothers’ disco days, pre-80s jock attire, and fugly peach fuzz facial hair. The period tailorings make the time and place of Everybody Wants Some a character unto itself (the costumes by Kari Perkins are especially fun) and the fun, freewheeling atmosphere helps one access this outdated persona—the all-American boy—that endures past its shelf life. Linklater’s always been a good filmmaker, and Dazed and Confused holds up to repeat viewings thanks to the strength of its script and cast, but Everybody Wants Some reminds audiences that the spirit of some of America’s indie pioneers endures through the success and grind through which hits like Boyhood take them.

Jenner is a likable lead and the film uses his relatively bland screen presence remarkably well to show how easily one accepts a stereotype as Jake perceptibly becomes part of the pack. The film gradually peels back layers of his character and reveals that, while he probably is the guy who always charmed a keg party, got the girl, and was named his school Prom King, he’s not necessarily the dumb pretty jock he appears to be. On the other hand, sometimes a guy plays the part he looks, like the country bumpkin Beuter (Will Brittain), while the team captain, McReynolds (Tyler Hoechlin), is a hot-headed sore-loser reared on the myth that winning is everything as resident doofus Jay (Juston Street) steals the show with a performance that belongs on Trailer Park Boys. The characters are often the butt of their own jokes and the young, boisterous cast is game to play up and against stereotypes to challenge the ways in which audiences see cliques on campus and, in some cases, show that there’s more to the person than meets the eye.

There is something profoundly American about the way that Everybody Wants Some uses the nostalgic thrill of baseball to tap into various psyches within the ensemble of privileged male characters. The film doesn’t let them off easy as it watches them pop beer caps and tap coeds’ bottoms: these guys think they’re invincible, but Linklater’s subtle sense of humour implies that they’ll more likely be pumping gas long before Jesse and Celine play Amour if and when Linklater revisits their story. As Everybody Wants Some captures the fun, carefree days between boyhood and adulthood, the aimless humour of the film wonders if some kids will ever grow up. (But no worries if they don’t.)

Everybody Wants Some is now playing in theatres.