Canada at Cannes: 'Oh What a Wonderful Feeling' Review

Oh What a Wonderful Feeling 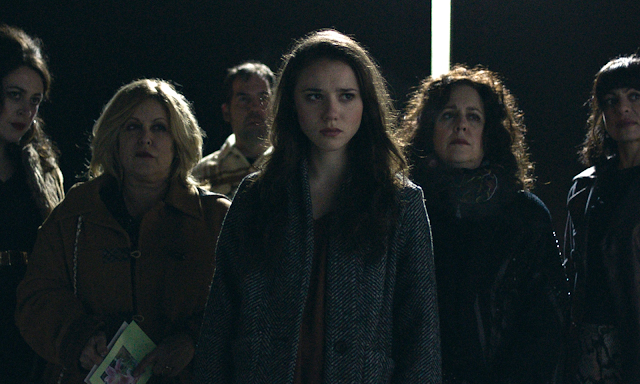 Oh, what a wonderful feeling it is to experience an exciting new Canadian director. Quebecois filmmaker François Jaros already has a steady list of accomplishments in his career with back to back Jutra Gala Cinema awards for the shorts Life’s a Bitch (2014) and Maurice (2015), but it’s nice to discover his work following its breakout on the international scene. Jaros’s new Cannes debut Oh What a Wonderful Feeling is a dark, allusive, and playfully demonic work of art.


The film is a Lynchian nightmare of foxes of all kinds. Oh What a Wonderful Feeling begins and ends with orange fiery deaths as the film kicks off with a suicidal fox and then ends with a bang. Chaos reigns, indeed.

More foxes appear and a little more banging happens at a shady roadside harem in rural Quebec where a handful of truck stop hustlers dances with a seductive army of dangerous desires. Amanda, played by Karelle Tremblay of Les êtres chers, is the newest girl on the market. Her strange night leads her behind bars with johns and lingering under the safety of a lone streetlight. Weirdos prowl, men fight like tomcats, and the workers sign a farewell card for a retiring colleague. Every image harbours a laugh and a sense of dread, and piecing the film together is a cautious balance of the absurd. It’s all very strange and surreal, but also ominous and seductive.

The film has a dark, dense atmosphere thanks to the moody cinematography by Oliver Gassot, particularly one specular shot that pans the full 360 degrees of the roadside hellhole as violence breaks out and creepers lurk within the shadows, while a brooding soundtrack keeps one on edge. Tremblay’s strong screen presence, meanwhile, frequently carries the film with Amanda’s vulnerability and willingness to explore dark places. Jaros unfurls this largely silent puzzle in an elliptical dreamspace where images flow and characters wander. This dreamlike drama feels detached from reality as Oh What a Wonderful Feeling puts the audience in a nightmarish purgatory, suspended for sixteen minutes of curious reverie.

Oh What a Wonderful Feeling has its World Premiere at the 2016 Cannes Film Festival.

Oh What a Wonderful Feeling - Trailer from François Jaros on Vimeo.