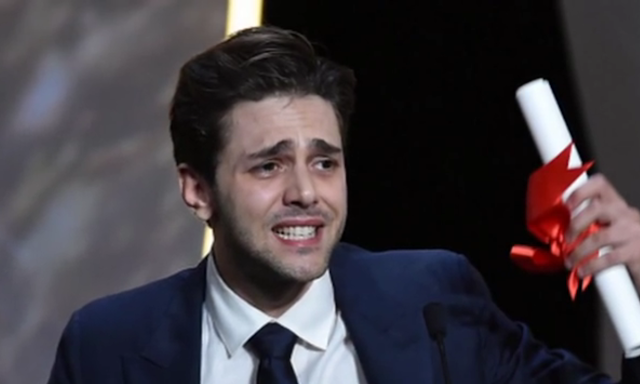 Well, here's a surprise! Canadian wunderkind Xavier Dolan wasn't this year Palme d'Or winner, but his trophy shelf got a Cannes upgrade. Dolan's It's Only the End of the World the the Grand Prix at this year's Cannes Film Festival. The prize, essentially the festival's runner-up honours, are upgrade from the Jury Prize he received for 2014's Mommy. Coming in second was an impressive feat for a film that was largely expected to go home empty handed. The big winner was Ken Loach, who earned his second Palme after 2006's The Wind that Shakes the Barley, for I, Daniel Blake.


Dolan's film was greeted with harsh, if not toxic, reactions upon screening for the press with several reviews sounding more like judgments on the filmmaker himself. Dolan even responded, harshly, and the Cannes jury passed its own verdict. However, he was somewhat vindicated by an eight-minute standing ovation and then boosted by a brutal response to Sean Penn's The Last Face, which arguably left the fest as the worst reviewed film at Cannes and scored a record low on Screen's annual jury grid. Hopefully, we'll see how It's Only the End of the World performs at other festivals against measured expectations.


Other winners included Andrea Arnold, who won the Jury Prize for American Honey and Olivier Assayas and Cristian Mungiu, who shared Best Director for Personal Shopper and Graduation, respectively. Maren Ade's Toni Erdmann, widely expected to take the Palme, was shut out.

Twitter, as always, seemed to have awarded Dolan and Cannes the Face Palme:


Xavier Dolan wins the Grand Prix which is NOT the big prize. Boos went up in the press room.
— Anne Thompson (@akstanwyck) May 22, 2016


@XDolan you deserve EVERYTHING. You're a wonderful artist because you're an exquisite person. My heart celebrates you tonight and always.
— Jessica Chastain (@jes_chastain) May 22, 2016


While Xavier Dolan should be on trial for crimes against cinema he is instead rewarded at Cannes. We should all be very worried.
— Dean Kavanagh (@DeanKavanagh89) May 22, 2016

I think Cannes might just have ruined Dolan forever. No chance he's going to rein it in now.
— Jessica Kiang (@jessicakiang) May 22, 2016


FURY ROAD was cut with precision, but Miller awarded Xavier Dolan, whose film has some of the worst editing made outside of film school.
— Josh Cabrita (@JoshCabrita) May 22, 2016