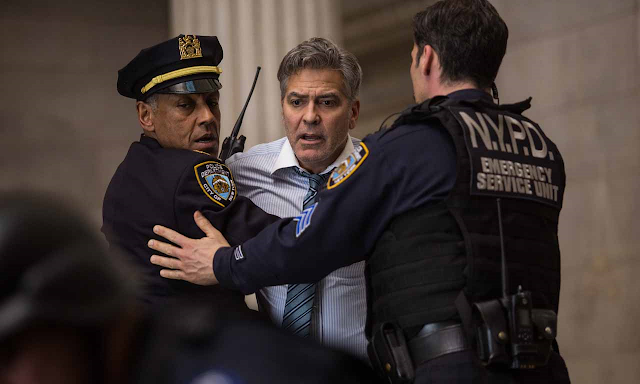 Gandhi's famous line says that an eye for an eye makes the whole would blind. Money Monster, however, argues the opposite theory. If a party in power does the little guy wrong, pop him in the pupil to give him some perspective.

This new work from director Jodie foster offers an Occupy-era mortality play that's part Dog Day Afternoon and part Network. George Clooney stars as Lee Gates, who hosts an obnoxiously sleazy TV show called Money Monster that offers financial tips in a frat house cabaret where entertainment is king and good journalism plays the fool. His whip-smart director is Patty Fenn (Julia Roberts). Patty, a pro, knows Lee’s show even better than he does and she lends Money Monster some dignity from the control room by anticipating her host’s zany moves.

What Patty doesn’t anticipate, though, is for a mad prophet of the airwaves to hijack her show.  Enter Kyle (Jack O’Connell) from stage right, who’s ready to play Howard Beale meets Al Pacino after being ramped up watching back-to-back Sidney Lumet movies. Kyle is mad as hell after losing all his cash in a faulty investment with the corporation IBIS, the collapse of which Lee performs in Money Monster’s opening segment. The fall of IBIS, which humorously has a trading abbreviation of ‘IBS’ to note the stock market’s volatility akin to explosive diarrhea, attributes itself to a glitch in the algorithm controlling the trades. It’s an obvious line of PR spin as Lee, Kyle, and everyone sees through it, but Money Monster smartly introduces the nature of cyber capitalism that removes humans from the equation and puts America in the sloppy state it’s in today.

Kyle puts Money Monster in an on-air hostage crisis when he storms the set with a gun and straps Lee into a vest of explosives. He wants explanations from everyone: Lee, the financial guru he trusted; Diane Lester (Catriona Balfe), the IBIS spin doctor feeding lines to Lee; and Walt Camby (Dominic West), the IBIS CEO who needs to answer for his company’s mistake.

Money Monster uses Kyle’s disillusionment with the system and his victimisation by corporate greed to give voice to the 99 percent and the countless Americans who lost their livelihoods in the nation’s economic meltdown. The script hammers its anti-establishment angst far too pointedly—and it’s almost inevitable that any film that gives a central character a gun, a soapbox, and 90-minutes to vent his rage will be fairly on-the-nose. Nothing in Kyle’s frustration is a new revelation—faceless corporate American screws investors out of their hard-earned salaries—but Money Monster taps into the simmering frustration and widening economic divides in America with its fast-paced chamber drama.

The film works far better as a commentary on the decline of good journalism in the age of click bait and trending topics. Kyle’s hostage situation obviously becomes the story of the moment as TV screens around the world tune to the Money Monster broadcast, which keeps rolling throughout the ordeal on Kyle’s demand, and the drama shows how a global audience, a collective voice, can unite to hold the one percent accountable for the imbalance it creates. As Patty gains control of the situation and directs Lee from the control room, the Money Monster team remembers how to be good reporters. They use the opportunity to ask the hard questions and follow the clues to push IBIS for answers—and, in turn, bide time to save Lee’s life.

While the hostage scenario of Money Monster sees mixed results, the newsroom quest for substantial reporting often provides thrilling drama. Clooney and Roberts, as always, have great chemistry together. They build a fun, convincing camaraderie of two vastly dissimilar colleagues whose Yin and Yang relationship better serves the show. Lee stands in for the one percent with his nice suit and evasive relationship with accountability, while the modest, no frills, and hard-working Patty brings the conscious of the American public. The personable pair of Clooney and Roberts, who create remarkable synergy despite rarely occupying the same space in the film, harkens back to a recently forgotten era of news media that emphasised depth of coverage and human interest—a point that Money Monster underscores with its frequent snippets of Lee’s incessantly annoying show. As the Money Monster team follows the trail to the top of the IBIS ladder, there’s something here in Foster’s drama that could have let Money Monster be the Spotlight of newsroom drama.

Money Monster never entirely works, though, because Lee and Patty are only two points in the film’s central triangle. Kyle often brings the film down, rather than gives it gravitas, since O’Connell doesn’t make the triggerman a compelling or sympathetic force. Lee certainly has a stain of blame on his character as Kyle catches the guru’s complacency and complicity with the machine of big business, but Kyle’s never in the right, either, as he uses violence and coercion to get results. O’Connell, impressive in Angelina Jolie’s Unbroken, is wildly outmatched here as the star power and screen presence of Clooney and Roberts make the television angle of Money Monster far superior to Kyle’s lament for America’s broken dream. Whatever Money Monster lacks, Team Clooney and Roberts hits on the money.

Foster mounts her largest production yet as she assembles a slick and fast-paced drama with admirable convictions. Money Monster unravels in its final act as the climax strains credibility, but the director gets every cent of her stars’ talent as Clooney and Roberts command the show, while fluid cinematography by Matthew Libatique energetically captures the behind-the-scenes frenzy of live TV. However, Money Monster also seems wildly disconnected with the era it interrogates. A film about the scope and reach of live TV might be better suited to a 9/11 parable, but, 15 years later, network television doesn’t hold the same power. Money Monster barely references the extent to which social media and digital platforms drive news and information nowadays: there’s nary a Tweet or a YouTube video throughout the hostage crisis, aside from a sidebar during a snippet of The Young Turks, although a series of memes in the finale redeems the omission.

Foster, however, ends the film by noting that audiences simply don’t have the attention spans that they used to hold. Perhaps as one story starts trending over another, Money Monster puts all of us on the hook for being too apathetic and distracted to ask the same questions that Lee and Patty had also abandoned.