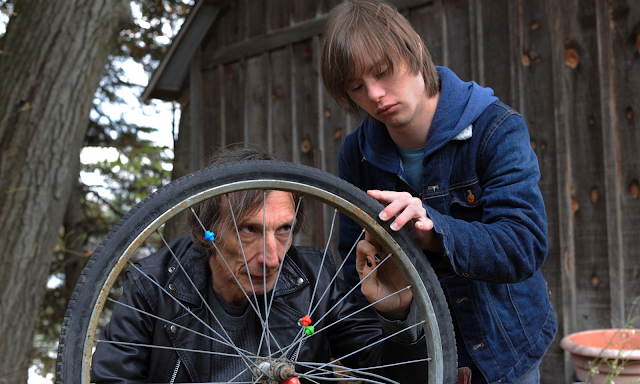 The Rainbow Kid is one of those movies that a reviewer will really wants to get behind, but just can’t. This festival film has admirable intentions. It hits theatres when the demand for diverse stories is louder than ever, so dismissing it is an awkward gamble, yet championing The Rainbow Kid seems like an empty and lost cause. This drama about a young man with Down syndrome ambitiously puts actors and characters with special needs front and centre in the frame of their own story. However, the noble intentions of The Rainbow Kid don’t inherently make it a good film. It’s a rambling, contrived jaunt down the Yellow Brick Road that ultimately offers a pat on the head.


Things get off to a rocky start for Eugene (Dylan Harman) when his difficult home life leads him to embark on a new adventure. His depressed mom inspires him to seek sunshine elsewhere, which encourages Eugene to obsess over rainbows and the myths that reside within their spectrums. He loves the idea that rainbows offer a gateway between men and women. This lore of the gender swap fuels his own coming of age odyssey that encounters sex, queerness, and gender fluidity along the way. Harman shines like a rainbow in earlier scenes that afford realistic snapshots of Eugene’s life at home and at school, but he struggles to carry the film, which is often a solo act, as The Rainbow Kid detaches itself from reality.

As Eugene grabs his bag of spare change, some PB&J sandwiches, and makes a long journey from the busy streets of Toronto to the dusty trails of some Shire-like land of idyllic nightmares, he encounters a host of characters who shape his experience. They also rob The Rainbow Kid of credibility each step of the trip. Paputts overcooks the drama with an everything-but-the-kitchen-sink approach that throws one crazier character and precarious situation after another at the young protagonist. However, the cinematography by Maya Bankovich and the music by Christine add sunny golden notes to the journey.

Eugene’s first encounter with a drifter (Nicholas Campbell) is a plausible test of the young man’s survival skills and spirit as the elder man shatters Eugene’s ambitions to find the end of a rainbow. He also offers him some beer when all Eugene wants is apple juice, and simple pleasures are sometimes their own reward. Enter a crossdressing retiree rocker (Julian Richings) in the next stage of the journey, who teaches Eugene how to mend a bike tire and how to please a lady, and The Rainbow Kid takes a weird step into La La Land as the colours of the rainbow become a little more eccentric. Riching’s performance is a highlight of the film as he uses his iconic status as the weirdest guy in Canadian cinema to create a character that breathes mythology, exudes eccentricity, and builds an accessible outsider. The balance of tones and dimensions is a trick with which the film itself struggles.

Throw in a second young adult with Down Syndrome and her creepy perv of a guardian, a fatal car crash, a random shooting, and some more special needs kids that awkwardly appear as if to lend mythic and otherworldly qualities to cognitively or developmentally challenged persons, and The Rainbow Kid treads too closely to Munchkinland territory for its own good. For a film that earnestly gives special needs characters a chance to shine, The Rainbow Kid basically treats its subject too preciously. The Rainbow Kid exudes admirable intentions, but it doesn’t find gold.

The Rainbow Kid is currently playing in Toronto at the Carlton.