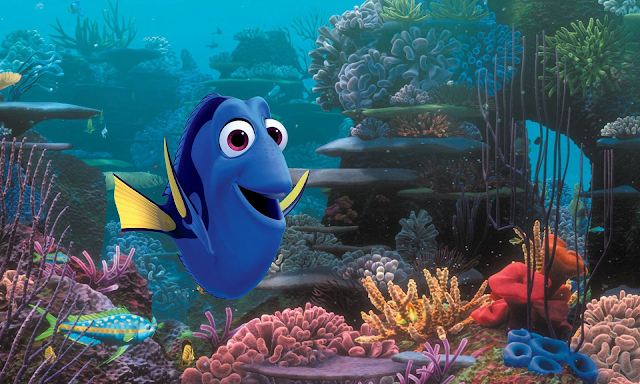 Pixar gambles hard with its 2003 hit Finding Nemo and wins big with the follow-up Finding Dory. Nemo, arguably Pixar’s best film, leaves a very high standard for Dory to match, especially since Ellen DeGeneres’s scene-stealing vocal performance as the blue tang with short-term memory loss is easily the best thing about the Oscar-winning feature. Sequels are risky enough, especially when such a great legacy is on the line, but they’re even trickier when one modest element of a film must carry an entire project. Can Dory make the move from supporting player to star? The answer, unsurprisingly, is an absolute ‘yes!’ Dory just keeps swimming in this adventure and she’s a scatterbrained delight.


Finding Dory doesn’t deviate far from the standard rinse-and-repeat practice of most sequels, but that’s just fine in this case since Finding Nemo is one of those films to which one can return again and again. One can’t swim in the same ocean twice, though, so the Finding franchise makes this quest across international waters a search for Dory’s parents, rather than have Marlin (Albert Brooks) look for his son Nemo (Hayden Rolence). Dory takes place one year after Dory and Marlin find Nemo when a field trip with Nemo’s school of fish triggers memories of Dory’s forgotten childhood. Just as she and Marlin swam to find P. Sherman at 42 Wallaby Way, Sydney, in the first film, Dory remembers a location in California and they all hitch a ride on Crush the turtle to get there.

This adventure swims much faster than the first film does, since Dory and company arrive at their destination within minutes and find a Sea World type place hosted by Sigourney Weaver as an audio guide. The Alien actress legitimately gets her best role in years with this performance and her hosting duties gains laughs every time Finding Dory repeats them. It's also a telling sign of the film's appeal to older audiences since the kids in the crowd aren't bound to get the joke. The film, thankfully, does away with any and all dated pop culture references and instead uses a self-deprecating poke at the state of Weaver's career as a running gag.

Dory becomes separated from Marlin and Nemo as she searches for her family at the aquarium, but she befriends Hank (Ed O’Neill), a seven-tentacled octopus (or septopus, as Dory calls him) and her old friend Destiny (Kaitlin Olson), a whale shark with whom she speaks whale. As Sigourney Weaver tells Dory where to go and as she and Hank become new friends for Dory, the forgetful blue fish learns that her true family isn’t just the pair of fishes she seeks, but also the orange clowns on the other side of the tank.

The jokes are essentially the same here with Dory’s memory loss and Marlin’s helicopter parenting driving the two threads of the film. DeGeneres’s adorably eccentric vocal work lends authenticity to Dory’s faulty memory by bringing chuckles for her endearing forgetfulness and empathy for plucky fish everywhere who persevere despite their intellectual disabilities. Dory’s motto ‘just keep swimming’ graduates from being an amusing catch phrase to an inspiring message for kids to endure. DeGeneres is every bit as winning in the lead as she is in a supporting part in Finding Nemo and Finding Dory goes swimmingly thanks to the loveable character she creates.

Brooks is curmudgeonly fun again as Marlin, while new voices from O’Neill and Olson add to the fun, as does Ty Burrell as Bailey the beluga. Veterans like Diane Keaton and Canada’s Eugene Levy bring some additional star power to the ocean in their fun performances as Dory’s parents. The most memorable new face of the film is an eccentric loon named Becky—a literal loon in the Canadian coin sense and in terms of her kookiness—whom Marlin and Nemo befriend while hunting for Dory. Becky draws big laughs for her frazzled appearance and crazy red eyes, which are both especially funny when Marlin has to ‘imprint’ on her so that she aids them like she would her own chicks. Becky adds to the film’s sensitivity towards mental illness, for even though she brings many laughs for her odd behaviour, Marlin’s unwillingness to trust her competence puts the two clownfish in a muck, thus showing that one should never judge a new friend based on his or her perceived abilities.

Becky’s ruffled feathers also highlight how far the world of Pixar animation has come in the thirteen years since Finding Nemo, for the birds of Dory have more texture and complexity in their plumage as the advances in computer animation add more depth and detail than before. (The 3D version of the film, which this review considers, is impressive, but not essential.) Finding Dory displays Pixar’s skill through densely packed images that swim with streams of lights and flowing currents. Every ripple and element of the ocean is visible on the screen, and one almost feels refreshed by the water in the summer heat. Dory is a visual marvel, but the animation never overwhelms the story or the characters, either.

If there’s any key fault to this return to the Finding Nemo world, it’s that Dory just keeps swimming. For a film that moves briskly, Finding Dory lumbers towards a messy and overdrawn final act. One catastrophe too many piles on an escape plan atop an escape plan, and the film eventually becomes needlessly repetitive—a fact that becomes especially frustrating since repetition is key to Dory’s charm thanks to her memory loss. One can only watch the same thing so many times.

Finding Dory might not inspire nearly as many repeat viewings as Finding Nemo does, but it’s a worthy follow-up and a welcome return for many of the animation house’s most beloved characters. It’s a great feat for DeGeneres too, whose madcap performance shouldn’t be forgotten by the year’s end.

Finding Dory is now in theatres.