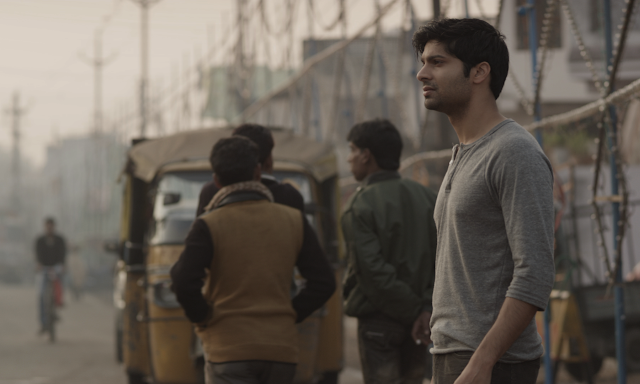 “Where is here?” This question arises in any Canadian literature class be it at the survey level or as part of the intensive rigour. This element of searching and wondering, of directionless and placelessness, is part of the maple-gazing ethos of CanLit long before the likes of Northrop Frye and Margaret Atwood put pens to papers. Move the question to Canadian film, and it’s more or less the same. It’s an internal struggle, something wild and disconcerting, for characters playing out a story in a vast and diverse landscape that’s constantly evolving.


Khoya, the new Canadian co-pro from director Sami Khan, internalises this struggle of rootlessness and placelessness remarkably well. The film sees Indo-Canadian adoptee Roger Moreau (Rupak Ginn)—Rog for short, a nice Canadianisation of “Raj”—wrestle with the sense of insecure dislocation in the place he’s always known as home. This element of searching and alienation seems appropriate for a film whose Hindi title translates to Lost.

The film tells the audience how Roger’s parents adopted him from India when he was a young boy. Now that his mother is dead, Roger tells his father (Stephen McHattie) that he needs to find his birth parents. It’s not a disavowal of the people who raised him, nor a rejection of his life in Canada, that inspires his trip to India. Roger just doesn’t feel at home in Toronto and he knows he never will unless he experiences the route of his migration to Canada through mature eyes.

Roger’s journey isn’t so simple. He begins the film in India, wandering the streets that seem so alien despite being the place where his life began. He has no connection to the people here, nor the ability to communicate with them, as Khan conveys by smartly withholding any subtitles from the Hindi dialogue that peppers the film as Roger searches for a distant relative. Upon finding his uncle, who serves Roger the first of many teas that he encounters along his quest, the young man sets off with his papers to the orphanage that arranged his adoption.

Not so simple. His papers, the administrator says, are forgeries. This news shakes Roger’s confidence and sense of self, which are already on unstable ground when the film commences.

So begins another journey as Roger tries to make sense of his original departure from India. As Roger retraces the clues that connect his falsified adoption papers and explores the possibility that he might be, at the very least, a victim of human trafficking, his identity is even less certain in India than it was in Canada as the likelihood of meeting his birth parents dwindles with each step. Where is here, indeed.

The motif of the return journey carries Khoya into Incendies territory (minus the Greek tragedy and incest) as it situates one Canadian story within larger narratives of people displaced by conflict and trauma. While Khoya isn’t as explosively mesmerising as Denis Villeneuve’s Oscar-winning drama is, it’s a very different kind of experience, more down to earth and driven by personal history than by high-brow literary references. Together, though, they’re part of a larger movement and an opening up of our concept of national cinema just as the idea of “home” expands and finds a new definition in Roger’s quest.

Khoya flickers with Roger’s restlessness as he finds himself straddling two nations, neither of which he comfortably calls home. Khan conveys Roger’s inner conflict by weaving between India and Canada, past and present, as Roger reconsiders his identity in light of the information he encounters on his search. Ginn, similarly, embodies Roger’s sense of alienation in both territories as he inquisitively looks for himself at different corners of the world. His character gradually becomes comfortable in his own skin, though, as he discovers himself by taking in the sights, tastes, and sounds of India after his search yields unsatisfying rewards. This open and accessible performance defines the character not by his past, but by his present as Roger evolves and learns to define home more in the Edward Sharpe and the Magnetic Zeroes sense than in terms of where he gets his passport. (It’s an inner harmony kind of place.) Warm and serene cinematography by Kevin C.W. Wong hugs the natural sunlight to play with Roger’s glowing romantic view of India that contrasts with the cold images of Canada that pepper the film and add an air of comfort when the searcher finally finds himself.

While the film struggles with a severe logical gap that appears between the last images of Roger in Canada and the final sequence of the film in India, Khoya is thematically satisfying even if it doesn’t make sense from a perspective of narrative coherence. There’s no swelling release at the end of Khoya and no overwhelming catharsis as the beautiful score by Daniel Ledwell favours an air of celebration and serenity rather than pull on the heartstrings. The film simply brings the peacefulness of resolution, and the confidence in having put the pieces together and having swept away the fragments. Closure. Coming home.

Khoya opens in Toronto at the Carlton on June 10.