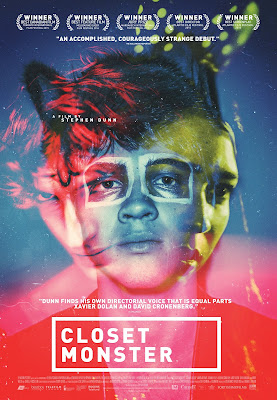 Elevation Pictures released a new trailer for Stephen Dunn's Closet Monster. The film, which opens in Canada starting with a July 15 launch at the Varsity in Toronto, scooped the prize for Best Canadian Feature at TIFF last year and scored a spot in Canada's Top Ten. The new trailer highlights Dunn's imposing (and Dolan-y) visual style, but the film's mostly worth catching for Conor Jessup's gutsy performance as Oscar, a closeted teen battling the demon that rumbles in his belly when he starts have feelings for his male coworker (Aliocha Schneider). Sadly, there's no snippet of Isabella Rossellini as Oscar's talking hamster.


Review: We wanted more from Stephen Dunn and now we have it. The up-and-coming Canadian director builds on the confidence he already established in short films like We Wanted More, Life Doesn’t Frighten Me, and others with his feature debut Closet Monster. Closet Monster, which won the prize for Best Canadian Film at the 2015 Toronto International Film Festival, shows Dunn’s originality on a bigger, bolder canvas, especially for the washes of colour that fill the screen and the fully layered soundtrack that makes the film so intense. Monster is a beauty and a beast. (Read the full Canada's Top Ten review of Closet Monster here.)