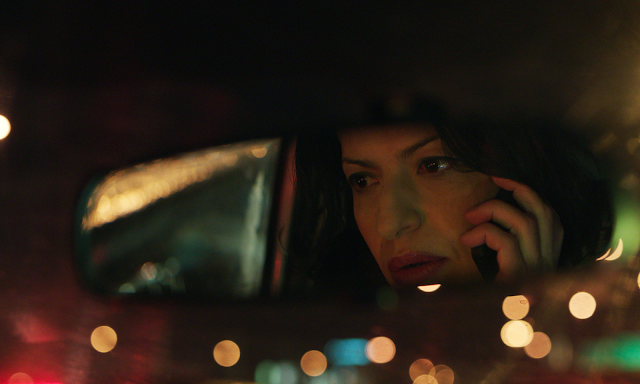 It’s Christmas Eve in Montreal. Snow’s a-fallin’. The streets are a winter wonderland. The city’s entirely white. Or, it’s white only on the surface.


Montreal la Blanche, even with its title, draws attention to this surface and shows a city that lives beneath this veil of whiteness. Kahina (Karina Aktouf) makes an off-the-cuff remark to her ex-husband (Reda Guerinik) about Montreal being the “white city.” Her reference, of course, isn’t to the flurries, but to the layer of racism that cloaks the city like new fallen snow. Montreal, despite its diversity, is a city that hides its true colours.

It’s Christmas Eve from every viewpoint of Amokrane’s taxi, too, but it’s also Ramadan, as the Algerian-Canadian driver celebrates the Muslim fast in solitude while his family carves a yule log at home. Amokrane (played by Rabah Aït Ouyahia) shares Kahina’s restlessness with living in a city that doesn’t feel like home no matter how hard one tries to make it so.

The two characters collide in a Crash-like encounter when a police officer impounds Kahina’s car and Amokrane, passing by in traffic, stops to give her a ride at the request of his passenger. (A jolly fat Santa Claus, of course.) Kahina desperately wants to catch her daughter before her ex-husband takes her for the holidays, while Amokrane does everything he can to avoid going home, and they take solace in each other’s company as the taxi drives around the darkened city. Both Kahina and Amokrane use Christmas Eve as an escape and the cold night of winter brings a warm reminder of home as they both wipe away the snowflakes that’ve made them cold in their adopted city.

The drive around Montreal offers a nice metaphor for the travellers’ own migration to Canada from Algeria. As Amokrane checks the rear-view mirror, he sees the past behind him, which flickers with memories of Algeria. Montreal la Blanche offers flashbacks of Amokrane’s life back in Algiers where his work in the army put his family at risk. These scenes of domestic life contrast sharply with the absence of images we see from the driver’s current home in Montreal.

Kahina is no stranger to violence, either, as she and Amokrane eventually debate her former life as a singer in Algiers where she was targeted for giving women a voice and expressing feelings about love. As Christmas carols pepper the air and thoughts of family make the holiday spirit bittersweet, the long ride into the night provides a cathartic confrontation of identities and a reopening of old wounds for both Montrealers.

Writer/director Bachir Bensaddek creates an expansive yet intimate world in the space of Amokrane’s taxicab. It’s a place where two people can sit in immediate proximity yet be worlds apart as the film shows in the push-and-pull dynamic between Kahina and Amokrane as moments of connection give away to cold distances as either one erects a border when she or he feels exposed. They’re both running from something that they must face to find security from the communities to which they’ve held themselves at a distance.

The film gives a portrait of a Montreal that audiences rarely see in film, since tales of the city usually fall into communities of either old stock Quebeckers or Anglophones in the Jewish quarters of the city often dubbed Mortdecai Richler’s Montreal. Outside of films like The High Cost of Living that takes audiences to Montreal’s Chinatown, Mambo Italiano and its trip to Little Italy, and The Tar Angel, another portrait of Algerian-Canadians, the diversity of the city doesn’t see its full complexity on Canadian screens. With these two characters and the small, contained space in which they travel, Montreal la Blanche invites audiences to see their stories as but two among many as the film frequently cuts to an Algerian troupe playing Christmas carols on traditional instruments, evoking a sense of here-and-there and culture fusion as one group puts its own mark on shared traditions.

The nice, understated performances by Aktouf and Ouyahia create complex and engaging characters through openness and empathy. Montreal la Blanche lets the audience inhabit the skin of these characters as the actors make them tangibly real. Even better, the two never play up the possibility of romance that could alight between the two characters in a more conventional road trip. Montreal la Blanche, after all, is about the journey and the destination.