(USA/UK, 113 min.)
Dir. Ariel Vroman, Writ. Douglas Cook, David Weisberg
Starring: Kevin Costner, Tommy Lee Jones, Gary Oldman, Jordi Molla, Gal Gadot, Ryan Reynolds
Heaven help me for the way I am… One doesn’t need a good defense for Criminal. This preposterously silly, but consistently enjoyable, actioner boasts an insane amount of star power for a film with such a ridiculous script. One doesn’t download or pop-in a flick like Criminal for some good dialogue, though, so anyone looking for an escapist adventure in the comfort of one’s own home can happily plead ‘guilty pleasure.’


This star-studded, high-concept actioner actually gets off to a great start with an intense opening sequence that puts Canuck Ryan Reynolds in the thick of a wild CIA operation that leads to nerve-wracking shootout. Then, in a twist one doesn’t see coming, the film shifts perspectives to the dark mind of Jericho, played by a raspy Kevin Costner, a career criminal and sociopath who is about as far aware from the family-oriented Bill Pope whom Reynolds plays. Criminal then moves into Self/Less territory and the film suffers somewhat from its resemblance to another Ryan Reynolds film that has a better grasp on its speculative premise. As the convoluted science introduces a passively likable doctor (Tommy Lee Jones) and a cranky CIA honcho (Gary Oldman), Criminal often loses credibility the more it tries to explain its premise and develop its innumerable characters in a supporting cast that includes Michael Pitt, Alice Eve, Gal Gadot, and Jordi Molla.

As a diversion, though, the movie offers action sequence upon action sequence with car chases, explosions, close-escapes, and rough encounters as the criminal/family man try to reconcile their differences and find a common DNA. The high-concept premise adds some novelty to the undemanding entertainment and Criminal probably seems a lot smarter the less one pays attention to it. Tune in during the intense set pieces, which director Ariel Vroman (The Iceman) choreographs with visceral steeliness and one might really enjoy it. It’s an ideal adventure enjoyed with either a crowd or a hangover. 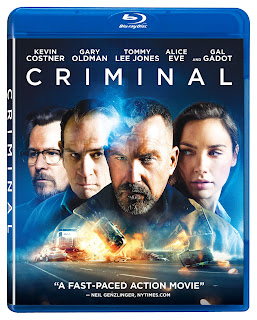 The disc: Criminal’s 1080p digital transfer looks slick and stylish, making the film an easy option for action fans who want to dapple in something darker. The 5.1 Dolby True HD is mostly noticeable on the sharply punctuated gunshots of the film, a trait that the film draws out in its decent array of bonus features.

Bonus: The best offering among the range of extras is the Director’s Notes Featurette, which is like an abridged director commentary with key scenes replayed in isolation as Vroman explains some of the artistic choices behind the selected snippets. Especially interesting is the director’s reference to the opening gun battle offering single-shot exchanges between Pope and the baddies to evoke the visceral sting and terror of the attacks in Paris back in January of 2015.

The deleted scenes generally don’t offer much aside from moments that were presumably clipped for time, but a few extra tidbits with Reynolds are worth the gander, as is one twist with Jones that might have given the film an extra edge. The featurette ‘Criminal Intent’ offers a thorough range of interviews with the cast, director, writers, and producer as they explain their characters and the chemistry that the actors created on set. (There’s a little JFK love fest going on between prior co-stars Costner, Jones, and Oldman, which is fun.) The short doc also lets viewers know if they’ve been pronouncing Wonder Woman’s name wrong all along since it turns out that Gal Gadot is actually Gall Gadot, while an added guilty pleasure comes in the number of times that Costner expresses doubt in the production but seems to be enjoying the ride. Finally, music video for the theme song “Drift and Fall Again” by Madsonik is a slick and catchy number to play in the room while chatting about the flick with friends. Case closed.

Criminal is now available on Blu-ray, DVD, and digital HD from VVS Films.