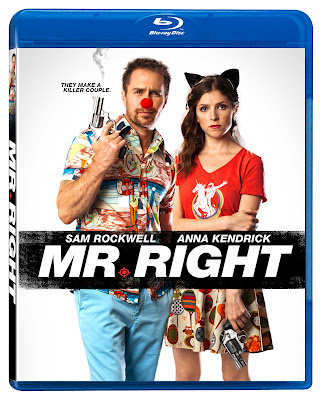 Anna Kendrick and Sam Rockwell make a killer couple in the action-comedy dating game Mr. Right. (Read the Cinemablographer review of Mr. Right here.) Mr. Right hits Blu-ray, DVD, and digital today from VVS Films. Lucky readers looking to lock ‘n load with this fun caper can enter for a chance to win Mr. Right on Blu-ray. Answer the trivia below for your chance to win a copy!


Synopsis: Hyperactive at the best of times, Martha (Anna Kendrick, Into the Woods) has gone full-on manic since her latest breakup. She babbles, parties like a monster, cooks everything in sight — and is looking to do something terrible when she meets Francis (Sam Rockwell, The Way Way Back). To anyone else, Francis’s approach would come across as creepy, but Martha can’t help but be intrigued. They seem a perfect match: she's bananas, he's bananas... except he's a deadly sort of bananas.  He’s a professional assassin.

Francis is a hitman with a cause: he unexpectedly kills the people ordering the hits. Just as Martha begins to realize her new beau wasn't joking when he said he had to step out for a moment to shoot someone, things start heating up for Francis. His services are solicited by a dubious client who's being sought by an equally dubious FBI agent (Tim Roth, The Hateful Eight). As the bodies pile up, Martha needs to decide whether to flee or join in the mayhem.

Thanks to our friends at VVS Films, Cinemablographer has three (3) Blu-rays of Mr. Right to give away! All you have to do to enter is answer the following question:

Send your answer and full mailing address to contests@cinemablographer.com with the subject ‘Mr Right.’*

Mr. Right is now available on Blu-ray, DVD, and digital from VVS Films.

*Entries without a mailing address may be discarded.
**Limit one email entry per person/household per contest. Multiple entries will be deleted and marked as spam. Open to residents of Canada only.
Posted by Pat Mullen at 7/05/2016 12:18:00 PM