'Ghostbusters' is Funny, But It Kind of Drops the Phone 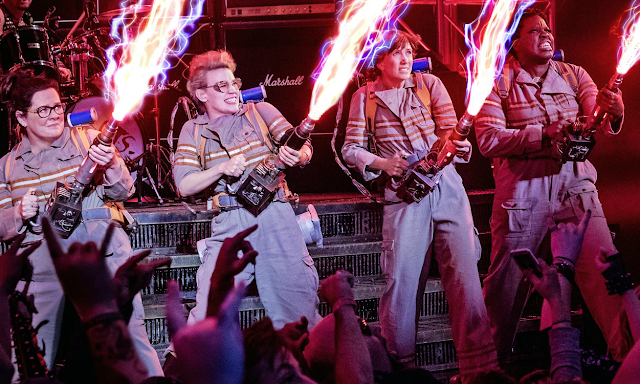 Ghostbusters answers the call for more female friendly Hollywood movies and, unfortunately, it kind of drops the phone. This totally unnecessary remake of the popular 1984 Ivan Reitman movie is passable summer fare, but that’s about it. The film essentially offers a retread of the original flick with altered chromosomes as Kristen Wiig, Melissa McCarthy, Kate McKinnon, and Leslie Jones occupy the roles played by Dan Aykroyd, Bill Murray, Harold Ramis, and Ernie Hudson back in the 80s. These girls are fun together and there’s no denying that the new Ghostbusters surpasses the original in the special effects department, although the 3D doesn’t add much aside from a few in-your-face eruptions of slime vomit.


One thing that the original Ghostbusters has that the remake doesn’t, though, is balance and synergy between the cast. The actresses are fun as a quartet, but every one of them seems to be acting in a different movie. Wiig fares best in a fun and gamely awkward performance as the intellectual of the group, while McCarthy, for better or worse, tones down the volume for which she’s become a star. (She’s much funnier in her underappreciated performance in this year’s The Boss.) Leslie Jones is the best surprise of the film in a sassy and charismatic performance that finds the right middle ground between Wiig and McCarthy. McKinnon, however, throws the film out of whack with a performance that mugs for the camera with a mix over the top shtick and bizarre facial expressions in a bunch of random cutaways that makes it seem as if the film editor had the unenviable task of trying to salvage a performance out of snippets from the ‘maybe’ pile. As a quartet, though, they’re an overall spunky unit.

Ghostbusters, however, never escapes the pretense that it’s a very cautious Hollywood endeavour to play into the zeitgeist while offering a safe investment to deliver on the bottom line. The nostalgia factor doesn’t work with the pro-feminist sentiment growing in popular culture today. The awkward casting of Chris Hemsworth as the hunky secretary, who is basically a male equivalent of a dumb blonde, adds an unnecessary edge of sexism to the film, too, as the female Ghostbusters fawn over their pretty assistant.

These four actresses deserve a better movie, not to mention an original one, rather trying to outshine the legacy of the previous film. Ghostbusters is funny-ish and it’s nice to see a film that empowers four women through the bond of sisterhood, but in the era of Bridesmaids and The Hunger Games, this redo of Ghostbusters doesn’t deliver on the promise of furthering feminism through butt-kicking fun. Neither a step back nor a leap forward, Ghostbusters holds the course for a better film to make a bigger splash.

Ghostbusters is now playing in theatres.