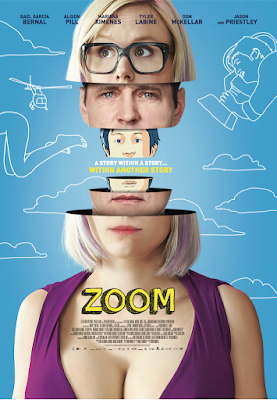 A new trailer is out for Zoom! This exciting hybrid film mixes live action drama and animation in a multi-layered web of art and reality. The film premiered at TIFF last year and went on to earn a Screenie nomination for its script. This meta-movie and Canadian-Brazilian co-pro is a new collaboration from the minds that brought Blindness and includes two stars from that film, Gael García Bernal and Don McKellar, along with Canucks Alison Pill, Jason Priestley, and Tyler Labine. Looks very original!

Synopsis: Zoom is a fast-paced, pop-art inspired, multi-plot contemporary comedy. The film consists of three seemingly separate but ultimately interlinked storylines about a comic book artist, a novelist, and a film director. Each character lives in a separate world but authors a story about the life of another. The comic book artist, Emma, works by day at an artificial love doll factory, and is hoping to undergo a secret cosmetic procedure. Emma’s comic tells the story of Edward, a cocky film director with a debilitating secret about his anatomy. The director, Edward, creates a film that features Michelle, an aspiring novelist who escapes to Brazil and abandons her former life as a model. Michelle, pens a novel that tells the tale of Emma, who works at an artificial love doll factory… And so it goes...

Zoom opens in theatres and on demand August 12.