André Turpin is one of the best cinematographers in Canada. Just look at Mommy, Incendies, Tom at the Farm and other recent efforts. He knows the art of composition and builds dramatic depth and tension by setting up a shot and using camera movement to exploit cinematic space to its full potential. He doesn’t shoot his latest feature directorial effort Endorphine, but the film looks fantastic as it envisions a dark, labyrinthine, and speculative world that exists in the grey area between Enemy, Inception, and Upstream Color.

The film features one woman at various stages of her life as she navigates between a traumatic event and the places she explores in comatose states of unconsciousness. Played by Sophie Nélisse and Mylène MacKay (both TIFF Rising Stars this year) in her young to young adult years and then by Lise Roy in her senior years, Simone navigates complex realities. Her world is a time loop, as she wanders stairs that never begin or end and passes through doors that only seem to go in one direction. What Endorphine brings in style and atmosphere, however, it lacks in logic and coherence as it rapidly devolves as it progresses. A few lectures make it sound smart, but it’s disappointingly hollow.

Not even Ellen Page can save the insufferably convoluted Tallulah. This film explains why ‘Sundance’ now assumes a pejorative connotation as Page plays the title role and every element of the character feels scripted and calculated beyond credibility. Tallulah is, for lack of a better word, a little shit. She’s a self-absorbed and self-pitying drifter who survives by stealing credit cards and dumpster diving. She lives in a van that embodies her directionless and desire to escape responsibility. The film never gives the audience a reason to care for Tallulah or understand her self-righteous freeloading.

When Tallulah steals a baby from a drunken hot mess of a mother (Tammy Blanchard), Tallulah takes a love it or hate it leap as the film hinges on a) believing that anyone would do something so stupid and b) sympathising with Tallulah by blaming the mother. Far too many characters in the film (cops and social works) point the finger at the mother to lend the story any authority. Blanchard’s terrific performance pulls the film back on track, while Allison Janney’s knockout turn as the mother of Tallulah’s ex-boyfriend and, ultimately, the victim of her biggest con. Janney’s character, embittered, jaded, and cautiously eager to confront the mistakes of her past, gives her one of her darkest, funniest, and most down to earth performances in years. If anyone gives Tallulah gravity, it’s her.

Tallulah is now on Netflix. 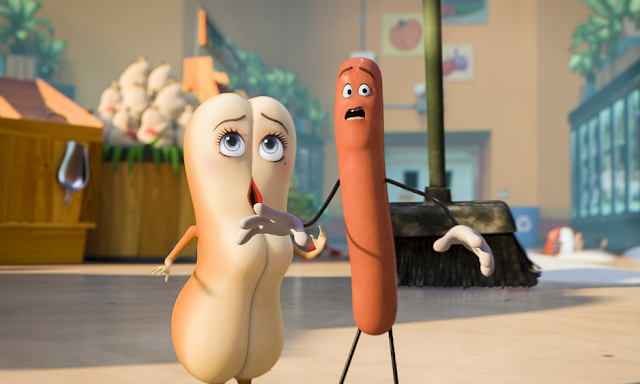 Seth Rogen and company unleash a five-aisle food fetish in the irreverent animated comedy Sausage Party. The zany romp is not for kids despite the cheery songs and warm buns that appear in its opener numbers. No, kids shouldn’t be exposed to wieners onscreen until they’re eighteen, and Sausage Party has a lot of fun using raunchy humour in the most unappetizing way as Frank the hot dog (Seth Rogen) plans to get all up in Brenda the bun (Kristen Wiig) once a happy shopper picks them up and brings them the outside world. But just as all the sweet things one enjoys in the grocery aisle turn out to be horrible, so too does real life.

Sausage Party runs with the idea that all the food bangs in the grocery store during the off hours. The humour is consistently juvenile, but it’s also very clever in its creation of farcical naughty humour with gags like Selma Hayek playing a lesbian taco providing a highlight. The team of five (!) screenwriters aims for just as many dick jokes as one expects them to with the wieners cracking gags on size, girth, and how best to fill a bun. The villain of the film is also a literal douche, which doesn’t get nearly as much mileage as the film thinks it does. Sausage Party is often at its funniest when it isn’t cracking dick jokes and instead uses the absurdity of living, dancing, talking foodthings that carry all the politics and foibles of the human world into foodie land. When Sausage Party is funny, it’s very funny. When it’s not funny, it’s like a cold hot dog, plain and unsatisfying. Oh, and there’s an orgy.