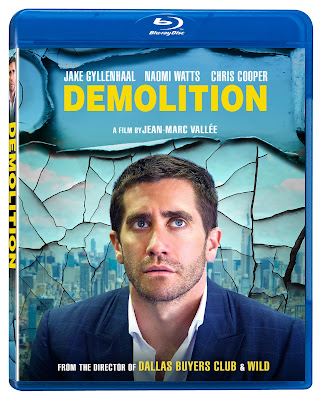 Jake Gyllenhaal breaks his home apart bit by bit in Jean-Marc Vallée’s new drama Demolition. (One of this blog's picks for the best films of the year so far!) Before taking a cue from Jake G, enjoy JM-V’s latest in the comfort of your own home as Demolition comes to home video. Demolition is out now on Blu-Ray, DVD, and digital from VVS Films, and Cinemablographer has some swanky prize packs to give away. Answer the trivia below for your chance!

Synopsis: Davis (Jake Gyllenhaal), a successful investment banker, struggles after losing his wife in a tragic car crash. Despite pressure from his father in law Phil (Chris Cooper) to pull it together, Davis continues to unravel. What starts as a complaint letter to a vending machine company turns into a series of letters revealing startling personal admissions. Davis’ letters catch the attention of customer service rep Karen (Naomi Watts) and, amidst emotional and financial burdens of her own, the two form an unlikely connection. With the help of Karen and her son Chris (Judah Lewis), Davis starts to rebuild, beginning with the demolition of the life he once knew.

Thanks to our friends at VVS Films, Cinemablographer has four (4) Demolition prize packs to give away! Prize packs include a Blu-ray of Demolition and a CD from the band Half Moon Run, whose track “Warmest Regards” is featured on the Demolition soundtrack. All you need to do to enter is answer the following question:

The band Half Moon Run, which appears on the Demolition soundtrack, is based in which Canadian city?

Send your answer and full mailing address to contests@cinemablographer.com with the subject ‘Demolition.’

Demolition is now on Blu-ray, DVD, and digital from VVS Films.

*Entries that do not include a mailing address may be discarded.
**Limit one email entry per person/household per contest. Multiple entries will be deleted and marked as spam.
***Limit one win per person per month.

Cinemablographer and VVS Films are not responsible for incorrect or incomplete mailing addresses. Prizing returned as undeliverable, unclaimed, or with incorrect addresses will not be resent.
Posted by Pat Mullen at 8/04/2016 12:56:00 PM